Is Bitcoin Edging Closer to the End of a Bear Market?


The back and forth experienced in the Bitcoin (BTC) market might soon come to an end based on various indicators, according to a crypto analyst under the pseudonym PlanB.

PlanB, who is the creator of the Stock-2-Flow (S2F) model, acknowledged:

“Realized Price / Moving Average (RPMA, purple) shows the Bitcoin cycle best. Relative Strength Index (RSI, yellow) is similar but can be misleading at critical times (e.g., 2nd half 2021). The good news: the bear market is almost over. Waiting for RPMA and RSI to start rising again.” 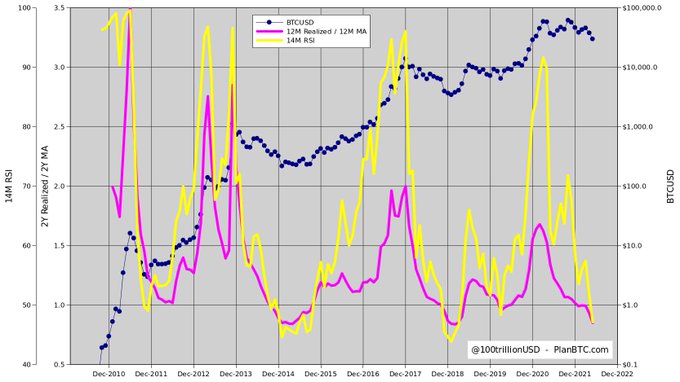 Similar sentiments were shared by market analyst Matthew Hyland, who acknowledged that the monthly RSI was approaching historical lows.

The relative strength index (RSI) is a momentum-based indicator that analyzes overbought and oversold conditions. Therefore, this indicator is almost hitting historical lows in the Bitcoin market, indicating an extremely oversold situation, which is often followed by a price rise.

“Bitcoin funding rates remain negative, indicating that short positions are dominant. This is a positive sign for a potential rebound in BTC price.” 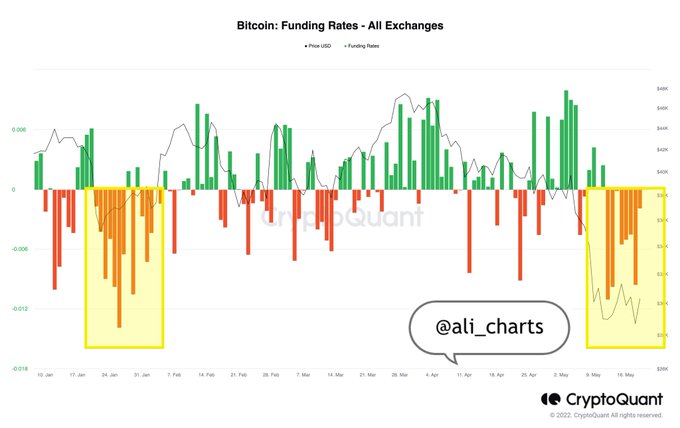 PlanB had previously noted that it became crystal clear that Bitcoin’s bull run was over in the first quarter of this year because a full-blown bear market had emerged.

For BTC to increase its rebound chances, the leading cryptocurrency ought to hold the $29,000 area.

“The most significant support level for Bitcoin sits between $29,330 and $30,200, where more than 1.23 million addresses hold nearly 850,000 BTC. BTC needs to hold above this demand wall for a chance of rebounding. Failing to do so can lead to the continuation of the downtrend.”

Bitcoin was hovering around the $29,425 area during the early hours on Sunday, according to CoinMarketCap.

'Little Yellow Bird,' the New Zealand-based clothing company, has gathered an array of sustainably-motivated organizations to form what it has named the 'Circular...

'Roblox,' one of the most-played video games in the world with over 50 million active users, has released the 'Roblox Layered Clothing' update....

The One Moisturizer Zooey Deschanel Uses ‘No Matter What’

In a recent article for CNN, Zooey Deschanel dishes on her go-to beauty products, from her daily serum to her iconic red lipstick. Starting...

Craghopper's SS22 collection, dubbed Sanctuary, comments on the difficulties of the last two years to illustrate how society found sanctuary within the home....

There are few ways to show the world you care about your appearance as easy as getting your hair in order. After all,...

How to See Your Instagram Stories Views in 3 Easy Steps

What do we know about the bride, Nadia Ferreira, of Marc Anthony