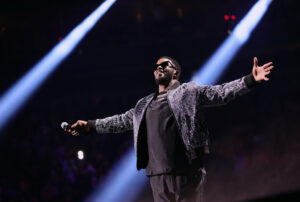 Kanye West‘s latest fallout has cost him billionaire status and made way for Hip-Hop stalwart Sean “Diddy” Combs to sit at the billionaire’s table.

According to Zogblog, Combs has finally broken through that elite ceiling where only he and Jay-Z sit as Hip-Hop luminaries. Zack O’Malley Greenburg released the current list of Hip-Hop’s Wealthiest Artists of 2022. Although Greenburg has not created a list since 2019 when he was an editor at Forbes, four of the five people on the list are returning along with one addition who is not a Black artist.

Shawn Carter, otherwise known as Jigga Man, tops the list with a reported value of $1.5 billion, the highest amount that he has accumulated since becoming a part of the billionaires club. He was the first rapper and/or Hip-Hop entrepreneur to become a billionaire and it does not look like he will relinquish the top spot anytime soon.

The third Hip-Hop artist/entrepreneur to break the billion-dollar ceiling is Sean “Diddy” Combs. The honcho who started Bad Boy Entertainment has been building since and was always expected to be one of the few to enter that financial arena. The man who owns and operates Combs Enterprises came in at a cool $1 billion, snagging the second place standing on the list.

Coming in third, is the man who has been making news headlines daily for the past six weeks. Kanye has lost the top spot and the keys to the billionaires club all because of his recent remarks. The artist, after losing his adidas deal, was dropped down to a purported worth of $500 million—still a nice amount but more than half of what he was worth a week ago.

A newcomer on the list of Hip-Hop’s Wealthiest Artists 2022 is not a mainstream name. Gilbert “Berner” Milam is worth $410 million. The rapper from the San Francisco Bay area owns the Cookies cannabis empire. He signed with Wiz Khalifa‘s Taylor Gang Records but has made the bulk of his fortune from his cannabis business.

Finally, the man who almost became Hip-Hop’s first billionaire until word of his Beats By Dre sale to Apple was leaked by Tyrese rounds out the top five. N.W.A.’s Dr. Dre is valued at $400 million.

Hollywood is mourning the death of Aaron Carter. The singer was 34. Among those to share heartfelt tributes was Hilary Duff, who dated the...

It looks like "joining a Hangout" with your friends will now become a phrase that's only meant to apply to in-person endeavors. Shutterstock Google has...

Naomi Campbell is known as an exceptional actress as well as one...

Actor Hugh Jackman has tested positive for COVID the day after his...