Mariah Carey Reveals She ‘Owns All’ of Her Master Recordings 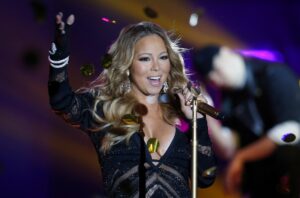 Mariah Carey is laughing straight to the bank after confirming she now owns all of her master recordings including 86 singles and 15 studio albums dating back to 1990.

Carey is preparing for the upcoming small-screen adaptation of her 2020 memoir, The Meaning of Mariah Carey. While opening up about the actress she would like to play her, the decorated Grammy award-winner spilled the beans on owning her masters.

‘”I’m here to do anything we need to do. I own all my old masters,” she told USA Today on Tuesday.

“I don’t think it’s about ‘cast the girl who sings the Mariah Carey style’ – whatever that is,” she explained. “It’s about casting a great actress with a somewhat similar look and just making sure the acting is there. Because we have the music – they can sing along to it.”

Carey’s miniseries will be directed by two-time Oscar nominee and Carey’s good friend Lee Daniels. The songstress worked with the famed director in The Butler (2013) and Precious (2009).

Carey’s memoir — co-written by author Michaela Angela Davis — shared intimate details about the singer’s rise to fame in the early 90s and difficult upbringing in Long Island as biracial, as well as her bipolar diagnoses, Daily Mail reports.

Carey is gearing up to rake in the dough as we go into the holiday season. Her cult classic holiday hit “All I Want for Christmas” is known to shoot up the charts around this time of year and make the singer millions.

With Carey owning all of her masters, she’s set to see a huge payout. On Monday, Carey marked the end of Halloween and the start of the holiday season with a comical video promoting her hit single and favorite holiday.

Carey posted a video of herself wearing a witch Halloween costume and peddling a bike, reminiscent of Wizard of Oz, before she is transformed into her “All I Want For Christmas Is You” holiday theme.

“It’s time!” she sings in her signature falsetto.

Our dads certainly taught us a lot. Like how to (successfully) change our oil, balance our checkbooks and ride our bicycles. Now it’s...

It seems that the life and career of Kevin Spacey will no longer be saved. British authorities are considering formally extraditing...

The Duke and Duchess of Sussex will follow a service at St Paul's Cathedral to celebrate Her Majesty's Platinum Jubilee. This is noted...

Strass, rock and champagne at the Celine show in Los Angeles