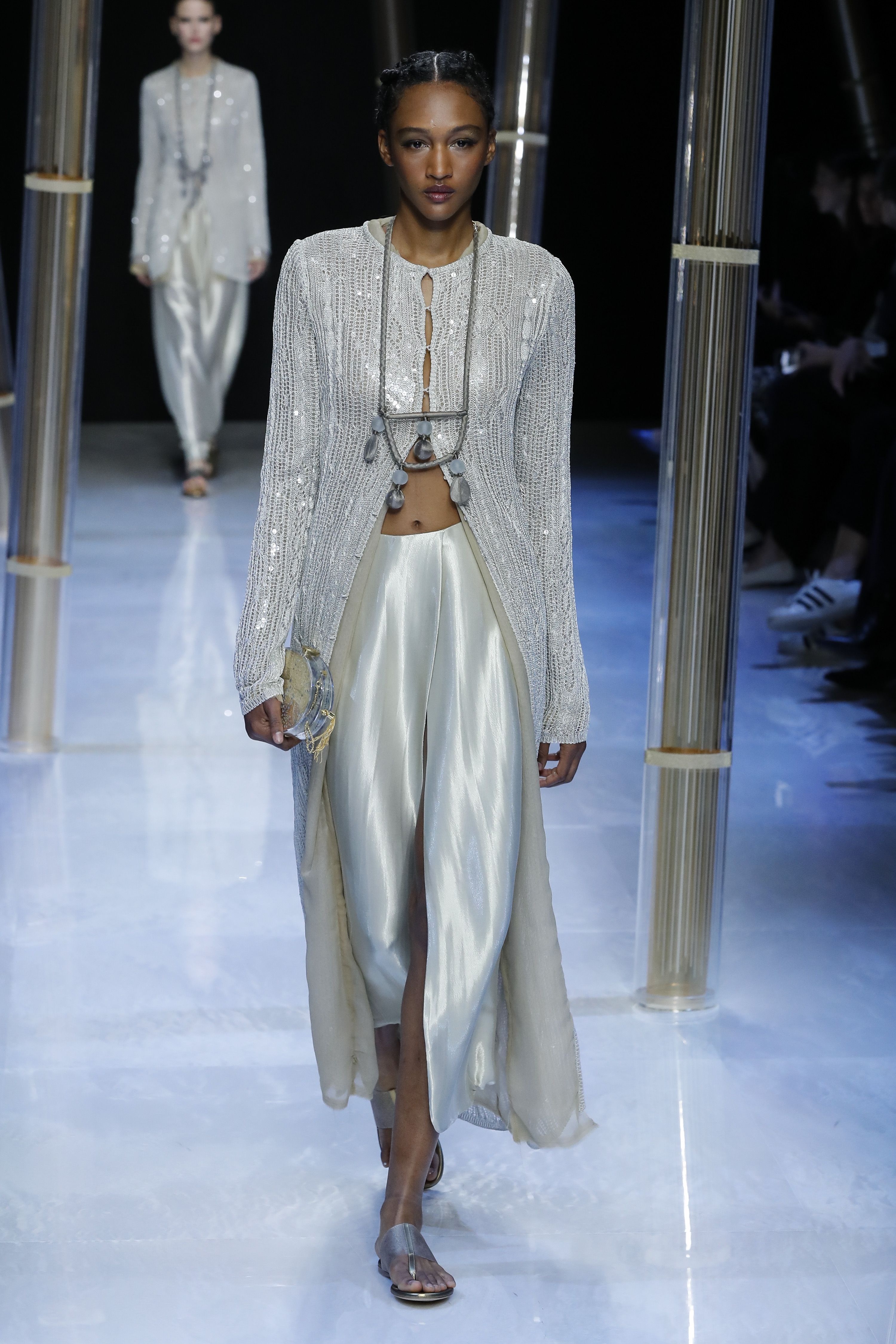 MILAN — Giorgio Armani is not the most social animal, but he likes to travel, in his mind at least, collecting fleeting impressions of beauty from his dreams. The notes for his latest collection threw up the word “evanescence.” The notion of a mirage-like transience saturated his show. Armani called it “Fil d’Or,” with the idea of gold thread linking the collection from beginning to end.

He was always a designer who bedded his work firmly in earthly reality. He once said the secret of his success was the balance he’d struck between pragmatism and imagination, the ease of his clothes being a case in point. Here, there was a subtle physicality in elasticated waists and cuffs (please, not track pants) and mesh tank tops, but the mesh was gilded because, as he’s aged, Armani has become absorbed by air, by light. His fabrics seemed weightless. Hammered silk coats and jackets floated, bodies were veiled in shimmering gossamer. Sequins were inset in knits for added shine. His first few models wore trainers, but they were soon replaced by serpentine sandals snaking round the foot. If that all sounds like some vision newly released from a genie’s lamp, it wasn’t far off, especially when the show closed with a procession of silvery silk and satin looks that might have been glazed in moonlight if you were partial to the stories of Scheherazade. I was seeing some Leon Bakst as well, thinking of the costumes of the Ballets Russes, especially with the full-skirted scarf-hemmed dresses worn over pants.

At this stage in his life, Armani, 88, claims it’s his work that keeps him going. Time is his enemy, and he feels like he still has something to prove. But don’t look for a sense of urgency or strain in his clothes. He’s too masterful for that. In the twilight of his years, the man who radicalised daywear has taken on luminous evening shades, rich purples and midnight blues, counterpointed by nocturnal glimmer and shine. Evanescent, maybe. Serene, for sure.

And that is just one of the reasons why a designer like Matty Bovan would seem to be his diametric opposite. Where one is calm, the other is chaos. The worlds they reflect in their work are so different, utopia versus dystopia, that comparison is futile. Except for the fact that Bovan showed a few hours after Armani, which offered an opportunity to brood on – and maybe take reassurance from – the breadth of fashion at a time when the walls are closing in. (The Italian general election I’ve been referring to all week has resolved itself in a worst case scenario.)

Bovan framed his show with a quote from American poet Theodore Roethke: “In a dark time, the eye begins to see.” For some time, his collections have focused on the Great British Decline, but coming to Milan obviously gave him a larger platform to make a point about the wider world. Except this is what he had to say: “My duty is more and more to provide some kind of escapism and optimism. I’m flying the flag for Britain and I want to prove how well we can do it, whether I’m here, there or wherever.”

He’d been coming off a period of personal turmoil when Domenico Dolce and Stefano Gabbana contacted him to offer support for a show in Milan after coming across him on Instagram. No strings attached, complete carte blanche. Bovan jumped. They opened their archives and he was able to reproduce denim, corsets and accessories for his own collection. D&G printed his stockings, he repurposed shoes from past seasons. Plus, he was thrilled that he got to work with Italian seamstresses. Bovan reckoned between 20 and 30 percent was drawn from Dolce, which loaned a collaborative edge to the venture. He was quick to point out that everything that wasn’t made in Italy was produced in the UK, particularly his home base of York. That’s always been a point of pride for him.

And so, to the clothes. Bovan called the collection Shapeshifter. “Subverting and distorting the body through harnessed chaos,” he wrote, with clothes designed to be (un)buttoned and (un)wrapped to shift the shape. His silhouettes were once again infused with a surreal historicism – huge panniers from the First Elizabethan Age, leg’o’mutton sleeves and long flaring skirts from Victorian England, warrior wear from Boudicca’s bodyguards, plus tabards, cloaks, kilts and the rest of the gleeful bricolage that Bovan brings to his designs. Stephen Jones sheathed heads in sci-fi pyramids to further scramble the timeline.

There was, however, a unifying principle with this collection: the checkerboard. Sounding a little like Armani, Bovan said, “My job is to be both fantasy and reality, to present a world, and you can break it down. I really want to go for it with this one.” He saw the checkerboards as a new camouflage, perhaps for a new conflict. Like turning human beings into dazzle ships. I saw “Alice in Wonderland” too. “It’s subdued but it’s there somewhere,” he acknowledged. “Surrealist Britain at its finest.”

You could apply that praise to Bovan now. The Milanese seemed more than happy to send up a hearty cheer for this great big fabulous bird that had unexpectedly landed in their tidy little nest.

You can never be too young (or too old) to start a good skincare routine. That said, it’s important to remember that most...

All About Product Compounding, According to Dermatologists

If you struggle with more than one skin condition, you may be in need of drug compounding, a product-mixing practice dermatologists often use...