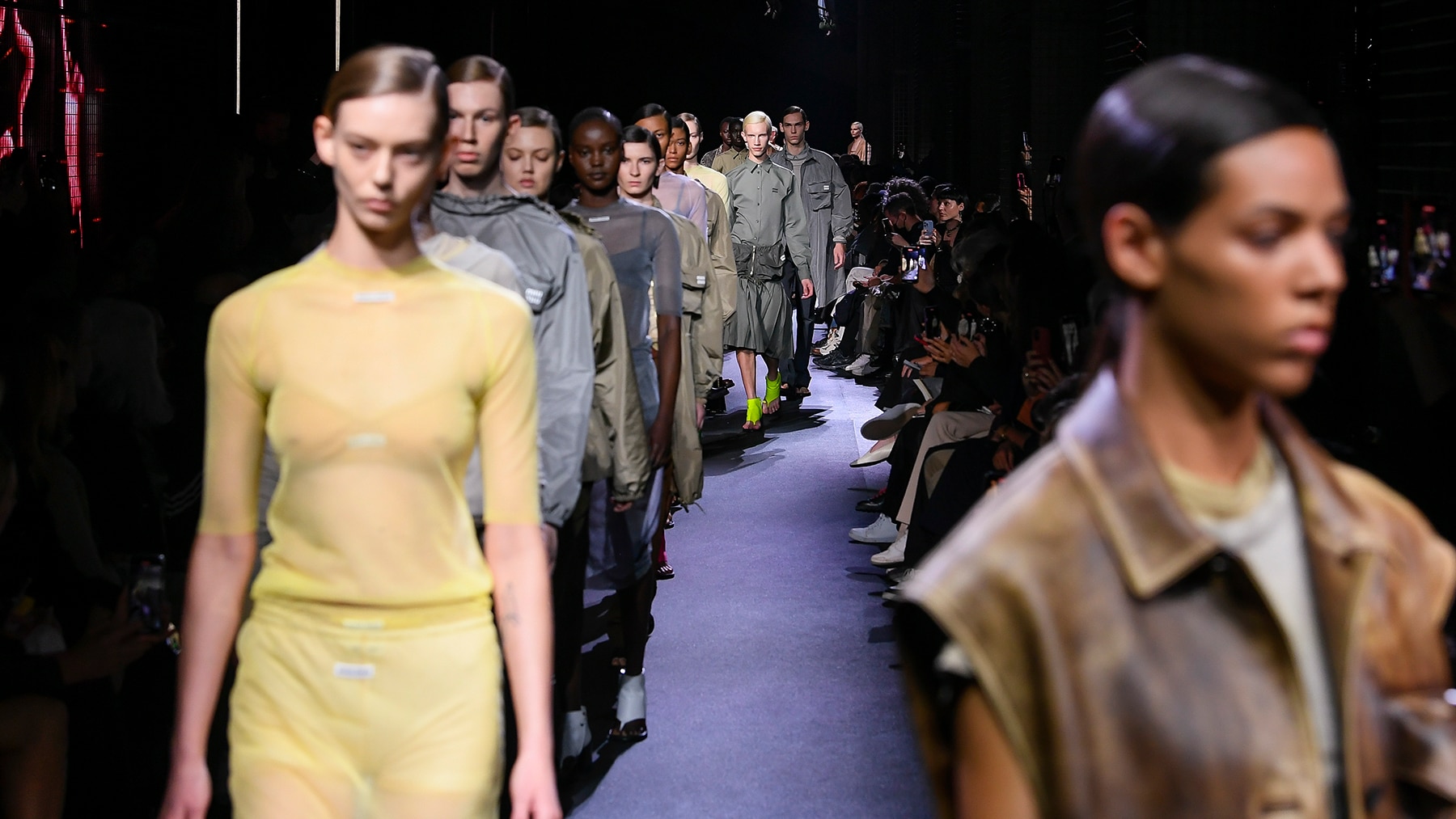 PARIS — The avant garde 1961 classic Last Year at Marienbad holds a special place in Chanel lore. Coco herself dressed the film’s star Delphine Seyrig, and for Spring 2011, Karl Lagerfeld made one of his most memorable mise-en-scènes with a huge set based on its enigmatic monochrome look. Virginie Viard cycled round again to Marienbad on Tuesday with her new collection. She said it was the film’s “sophisticated allure” that drew her. Inez and Vinoodh created filmic black and white collages to go with the show, along with a short film (projected on a LONG screen) starring Kristen Stewart, who has come to function as Viard’s alter ego, “closest to Gabrielle Chanel, at least to my idea of her.” It’s an astute move. Stewart brings something ineffably modern to the timelessness of a notion like “sophisticated allure.”

Viard’s collection had a winning simplicity even at its most formal with the eveningwear, where airy, full-skirted dresses were suspended from spaghetti straps. And it was suffused with light. Tweeds glistened, shoes sparkled. Viard was having fun. Feather trims and decorations added lift. There was even a boa, like she may have been thinking about Coco’s original 20′s-adjacent looks for Seyrig.

Miu Miu has always been Miuccia Prada’s playground versus the more conceptual exercises of her signature line. She insisted she’s both serious and fun, maybe even more so than before. After weathering some personal storms, Miuccia claims she’s in a much better mood these days, which would explain why Miu Miu has been on an upbeat roll for the past year.

Miuccia says it’s her job as a designer to keep fashion relevant, and translating her thoughts about the state of the world into clothes is the way she does it. Look at Prada and you’ll see designs that are quite capable of thinking dark thoughts. Miu Miu, on the other hand, brimmed with optimism, youth, sex and a kind of ingenious humour that turned a safety belt buckle into a bra, or a big old bumbag into a pelmet skirt. “Utility as decoration,” Miuccia called it. “Beautiful in a way that is useful.” And active. T-shirts, parkas, stone-washed denim, there’s no shock of the new in such ingredients, but layer three T’s and you’ve got a new look, wear a silky parka as a dress, cut the stone-washed denim every which way but loose … it was all in the way the proportions were shrunken, stretched and vigorously re-combined.

But it wouldn’t be a Miuccia Prada event if there wasn’t a sub-text to send you brooding into the late afternoon sunlight. Chinese artist Shuang Li’s meditative digital installation played on the walls of the Palais d’Iena while the clothes showed: fireflies, rain running down windows, petals falling, the beam of a lighthouse reflected in water. Li’s work explores “the tension between the material and immaterial.” Flesh and spirit — a suitable accompaniment to Miu Miu.

Louis Vuitton’s show environment in the Cour Carrée of the Louvre was also designed by an artist, the Frenchman Philippe Parreno, who wanted the impact of a circus act. “A fashion caravan descending on Vuitton for twelve minutes then disappearing,” he said. “Grandiose and vanishing. Like a monster flower.” Or like a spectacular alien craft landing in the heart of Paris and transporting us to Planet Ghesquière.

The designer said he’d never worked with anyone before quite the way he worked with his friend Parreno, in which case, bring on the dancing horses, because this was one of the strongest outings in Ghesquière’s decade at Vuitton. In his glory days at Balenciaga, he was responsible for stunningly precise collections that pointed to previously unimagined futures. Sure, memory plays tricks, but I can’t remember ever feeling that way about his work at Vuitton. This was different though, starting with the hardware, a zipper as big as a Miu Miu skirt is small, a luggage tag blown up to bagsize. Again, a lot of the impact was in unexpected proportions, and also the mutated utilitywear which is one of the season’s major themes. Useful beauty, as Miuccia Prada would call it. But the collection had a fierceness, too, an undercurrent of the contrariness that originally made Ghesquière such a force. Even at its prettiest, it’d give you a good kicking with those boots.

For many, laser treatments have become the secret weapon for treating many skin concerns ranging from hyperpigmentation to fine lines and wrinkles....

Oxford City Football Club (OCFC), one of the world's most successful and coveted football clubs, has partnered with Isle of Man-based bitcoin company...

Robert Stephan Cohen, who once served as an attorney for Melinda Gates, has been...

PLBY Group Inc. announced on Tuesday it has inked a deal with Charactopia Licensing to form Playboy China, a joint venture that will jointly own...