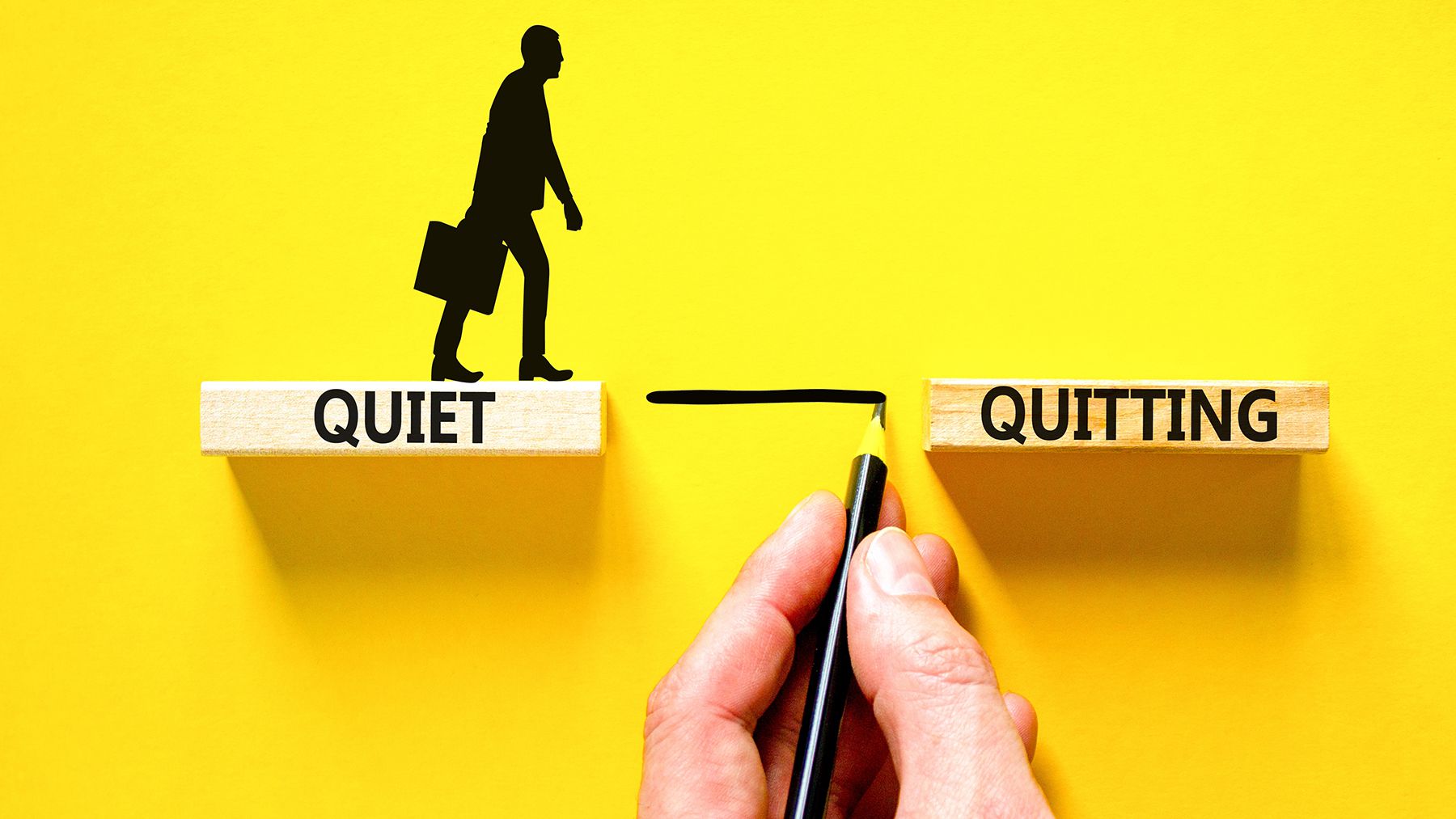 Keeping up with the popular trends on Instagram and TikTok doesn’t always require someone to learn the latest dance moves or test out a quirky makeup hack. These days, participating in the latest viral craze could just mean you’ve (quietly) quit your job.

In recent months, terms like quiet quitting, quiet firing and more recently labour hoarding, have entered the zeitgeist. A video posted last week on Twitter by actor Ryan Reynolds with the caption “Have you considered #quietquitting today?” racked up more than 700,000 views.

While the terms are new, the workplace behaviours they describe are, for the most part, not. Labour hoarding — or when companies hold on to workers during recessions — has been long used by economists to describe how some organisations respond to economic shocks. A worker who quietly quits refuses to routinely overachieve at their job or perform extra tasks outside of their work hours — the latter being much more common before cell phones and emails were the norm. A manager who engages in quiet firing freezes out an employee whom he/she dislikes or deems an under-achiever.

The recent infatuation with creating a catchy lexicon for fairly ordinary activities isn’t limited to the workplace; TikTok generates an endless series of “-cores” to describe minor shifts in fashion trends. But taken together, the labour micro-trends are a sign of the challenging climate for companies and their employees. The pandemic disrupted workplace routines as well as employees’ expectations around their jobs. Cute catchphrases on social media are one way for people to talk about it.

“As [leaders], I don’t think that this is a time for us to panic,” said Canetta Reid, senior vice president and chief people officer at women’s clothing brand and retailer Francesca’s. “Retail workers — like all of us — are trying to figure it out.”

What it means: The term, which started going viral over the summer, refers to workers doing precisely what their job requires, and nothing more. Quiet quitters adhere strictly to their company’s defined working hours, eschewing increasingly common after-hours chores like answering emails. Meant to serve as a rallying cry for burnt out employees, many see the trend as an extension of the Great Resignation, where workers took advantage of a tight mid-pandemic labour market to quit their jobs.

Some workplace experts (and social media commenters) suggested that the need for a dedicated label to describe people doing their jobs minus the unpaid overtime was a confirmation that overwork has become the norm across many industries.

Others argued that this attitude would hurt productivity, and that doing the bare minimum doesn’t lend itself well to tasks that involve collaboration or customer service.

How it impacts companies: A third camp argues that the term is so vague that it’s meaningless: self-identified quiet quitters make up at least 50 percent of the US. workforce, and likely more, a September report by Gallup indicated.

Still, companies need to monitor their employees for signs of disengagement, and should take talk of quiet quitting as a “call to action,” said Jeff Hewitt, partner in the leadership, change and organisation practice at business management consultancy Kearney.

The solutions are obvious, if sometimes costly: competitive benefits packages, including fair wages and useful perks, as well as a culture that prioritises diversity and inclusion, mental wellness and work-life balance, said Steve Kramer, chief executive at Workjam, a software application for retail workers.

At Fransceca’s, Reid said even small tweaks — like loosening the dress codes for retail associates (so they feel more “at-home”) and creating wellness challenges where participants can win prizes — have helped make store roles more appealing.

What happens in a recession: The golden age of quiet quitting may already be over. Searches for the phrase are off 94 percent from their August peak, according to Google.

Overall, retail workers are beginning to feel they have less leverage with their employers than they did six months ago, according to a forthcoming report from Lotis Blue Consulting.

But even as some workers are feeling less inclined to demand a salary bump — and are starting to think twice before handing in a resignation — we’re a long way from the labour market swinging back in the favour of employers, Hewitt said.

What it means: In response to quiet quitting, some managers have purportedly resorted to quiet firing, or covertly sabotaging an employee’s productivity and opportunities for advancement. That can mean blocking one-on-one interactions and feedback, passing them over for rewarding tasks and promotions, and neglecting to grant pay raises.

The idea of people being forced or freezed out of a company isn’t new. Even senior executives and founders are routinely forced out of businesses when performance suffers, or after an acquisition. The term itself was something of a cheeky response to quiet quitting – it’s no coincidence that Google searches peaked at the latter term’s height.

Although it’s almost always unethical, in some cases this behaviour can create legal challenges for a company if it qualifies as a “constructive discharge,” said Reid. Constructive discharge occurs when a worker’s resignation or retirement is deemed involuntary because the employer has “created a hostile or intolerable work environment or has applied other forms of pressure … which forced the employee to quit,” per the US Department of Labour.

How it impacts companies: About 35 percent of workers say they have been on the receiving end of quiet firing and 48 percent said they have seen it at work with their peers, an August LinkedIn survey found. Meanwhile, 1 in 3 managers said in a September study by Resumebuilder.com that they have enlisted quiet quitting to address quiet firing.

Managers that have resorted to quiet firing — and companies that have historically avoided firing underperforming workers — risk hurting overall productivity and morale at a time when healthy workplace culture is at the top of the list for many workers.

“You’re intentionally treating one colleague or one worker worse than others and everybody else sees that,” Hewitt said. “That can be toxic.”

If a manager has valid reasons to be dissatisfied with an employee’s performance, they have an obligation to address the behaviour directly so that it does not “set a new standard for what is acceptable performance,” he said.

What happens in a Recession: While some managers engage in this behaviour under the radar, most fashion retailers haven’t embraced quiet firing due, in most part to their desperation to keep workers happy in the current labour climate, Hewitt said.

What it means: When a company desperately avoids layoffs and holds onto workers at all costs. For example, a worker who shows up for a shift inebriated may be sent home to sober up rather than be fired, according to one example described in The New York Times.

The trend is most notable today because it’s the opposite approach to how companies typically operate during an economic downturn, when layoffs are often one of the first steps taken.

The strategy reversal is due in large part to retailers still feeling the consequences of the mass furloughs and layoffs they swiftly enacted when the pandemic started in 2020. Two years later, many are still stuck with hundreds — even thousands — of open positions.

How it impacts companies: Retailers are more inclined to invest in their existing workforce these days, noted Workjam’s Kramer.

Rather than discharge a worker who is displaying disinterest or underperforming in a certain aspect of their job, retailers are more likely to work with the employee to identify different opportunities in the business or teach them new skills.

“Retention has to be the focus,” said Francesca’s Reid. “It’s not necessarily saving up [talent] for a rainy day … but it’s knowing when you have good talent and … developing them so they grow with us.”

What happens in a recession: Some layoffs are inevitable in a recession. But companies may opt to “optimise some head office functions like IT and merchandising” rather than use the blunt instrument of mass layoffs of low-level workers, Kramer said.

Companies that postpone layoffs as much as possible even as times get tougher could set themselves up to be more attractive to job applicants in the long term, said Hewitt.

“The labour market has changed so significantly that the old strategy of people being disposable no longer works,” he said.

Dwayne Johnson's Black Adam has been hyped by the wrestler-turned-actor for several years now...

House of the Dragon is the latest TV screen adaptation of George R.R. Martin's...

Two federal agencies are cautioning employers to take a closer look at how they use artificial intelligence in hiring. Despite its productivity promises in recruiting and...