Style Not Com: The Anti-Diet Prada 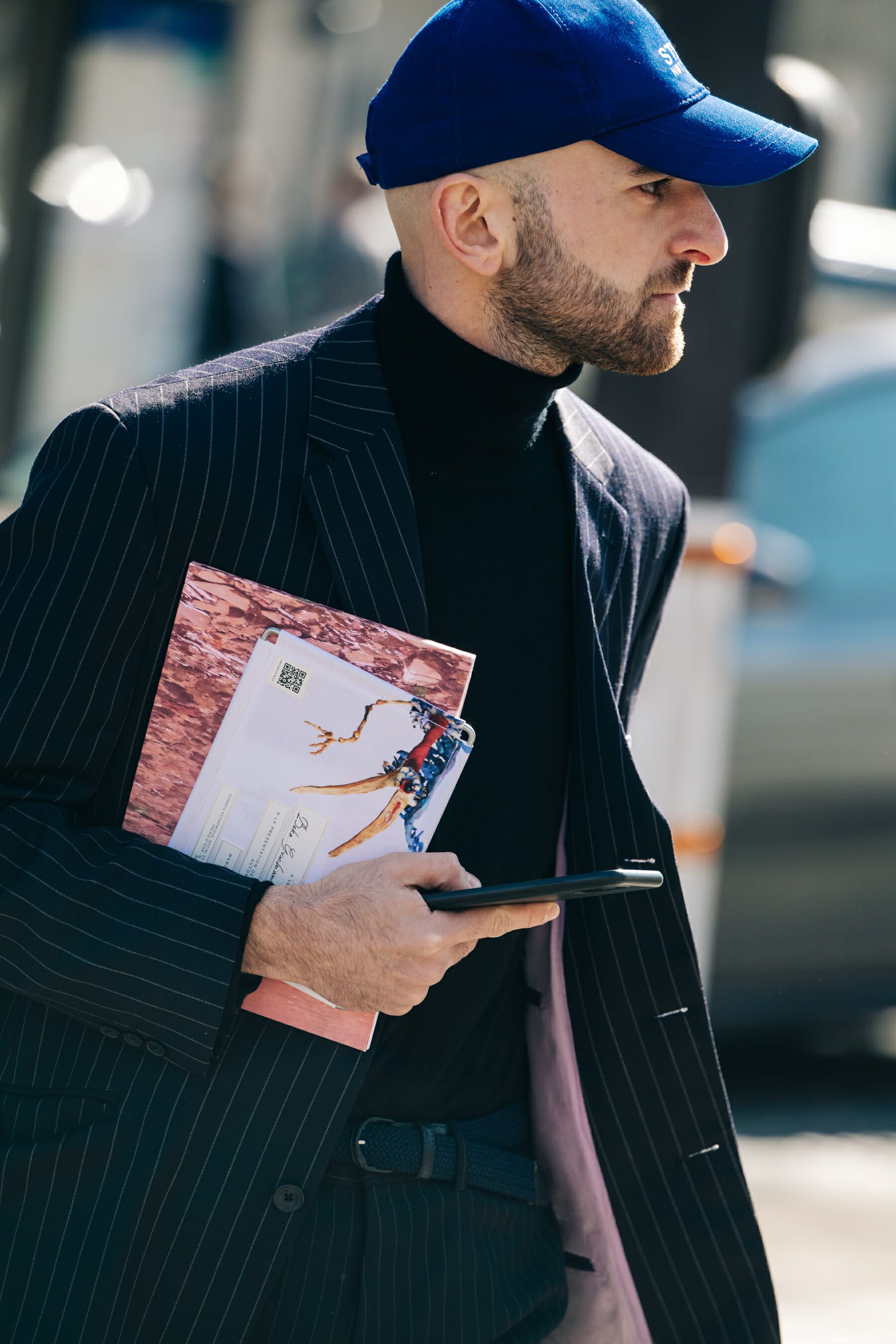 About 15 years ago, at a bus station on a corner in Kutaisi, the second largest city in Georgia, a 20-year-old Beka Gvishiani walked up to a magazine kiosk. Among the gossip rags and newspapers lay a thick, beautiful glossy, gold-foiled with the word “Vogue.” He spent about $10 of his birthday money on the September 2008 issue of Russian Vogue, the only edition that he could find in Kutaisi. It was the magazine’s 10th anniversary issue, starring Anna Selezneva and shot by Mario Testino. There was no going back.

“The [kiosk] lady used to text or call me every month,” Gvishiani said. Soon, he was logging onto forums like The Fashion Spot, absorbing editorials from Vogue Italia, Vogue Paris, Vogue Japan. “When you scroll the Google images, you open your eyes,” he said. “I wanted all of them.” He started buying old copies on eBay.

Now 31, Gvishiani has been working in fashion for more than a decade, mostly out of the Georgian capital Tbilisi, where he moved just a few months after buying that first issue of Russian Vogue. There, he started helping local brands with everything from social media strategy to international sales. He soon became a prolific fashion blogger, with a Tumblr called Glossy Newsstand that featured commentary on recent covers. In the early 2010s, he wrote fashion show reviews for Katie Grand’s Love magazine.

But it wasn’t until July 2021, with the launch of Style Not Com, an Instagram account that relays fashion news, insider stories and trivia in an arresting visual style — white Arial Bold text laid on a cobalt blue background (inspired by now-closed Paris retail temple Colette) — that he became a known quantity on the international fashion scene.

Gvishiani actually bought the URL Stylenot.com — which currently forwards directly to his Instagram account — in 2015 when publisher Condé Nast shuttered beloved fashion news platform Style.com, folding its coverage into Vogue.com. “I didn’t know how I would use it,” Gvishiani said, but his nostalgia for the site stuck. (The site briefly relaunched in 2017 as an e-commerce platform, only to be shuttered within months and its trademark and intellectual property sold off to Farfetch.)

Today, Style Not Com fills some of the void left by Style.com, best known for democratising access to the runway shows. By posting every single look from essentially every collection shown at the four major fashion weeks — along with a review — Style.com gave fashion fans more direct access to information that was previously filtered through newspapers and magazines, sometimes made available only months later. Industry types liked it, too, using its database of looks as a professional resource. Over the years, Style.com expanded its content offering, essentially becoming a real-time document of everything important happening in fashion.

While Style Not Com’s scope is far narrower than Style.com’s, it’s also about democratising access to information and appealing to insiders as well as consumers. A kind of visual aggregator, Gvishiani relays the day’s top news stories, plucked from press releases, brand representatives and well-known news sources, in a matter-of-fact, almost mechanical fashion, sprinkling in bits of fashion history and trivia (mostly birthdays) throughout.

For instance, a recent post on the grid about Saint Laurent’s Spring/Summer 2023 show simply read in all-caps, “SLIDE TO SEE SAINT LAURENT’S SHOW VENUE,” followed by a video of the dark blue early evening sky of Paris, scanning down to a lit-up Eiffel Tower and eventually, the runway floor. He added in the captions, “I AM ALREADY READY TO CRY BEFORE THE SHOW!”

He sometimes posts 5, 6, even 7 times a day, depending on the news cycle, but his posts are so bite-sized that it’s easy to consume a day of news in under a minute.

Gvishiani is also relentlessly positive: a wide-eyed, anti-Diet Prada. (While Diet Prada founders Tony Liu and Lindsey Schuyler still cover fashion in their snarky, holding-a-mirror-up-onto-the-industry way, they have veered further into pop culture — and call-out culture — and interest in them has cooled amongst insiders).

To be sure, fashion has always had its cheerleaders, but Gvishiani’s enthusiasm can be infectious, not least for jaded insiders. This is part of his magic.

So is his distinct visual identity and the way he has used the Instagram grid to build his brand. Over the past year and a half — a period when influencers have spent plenty of time complaining that the Meta-owned platform’s algorithm no longer favours the creator — Style Not Com has thrived, surpassing 75,000 followers with no marketing spend.

Gvishiani doesn’t consider himself an influencer or a journalist. “I feel I’m a digital media representative,” he said. “I’m far from being a professional journalist — I’m learning on the way … but I also don’t accept brand dressing requests, take part in campaigns or show my face or outfits.”

A few months after launching in July 2021, he caught the eye of Paris-based Instagram executive Clara Cornet, who works on the platform’s fashion and beauty partnerships and helped introduce Gvishiani to brands.

“His approach is obsessive,” Cornet said, noting that he has done all the right things to make the account pop — from breaking news to using all the different formats, including the increasingly important Reels — but above all, creating original content. “Highlighting people behind the scenes: who is changing jobs, info about the Balenciaga soundtrack, the number of hours it takes to make a Chanel couture look … he was really offering something totally new to our platform.”

Now, Gvishiani gets the sort of attention many content creators crave. In person at fashion shows, where he often sits front row, he is spritely in a baseball cap, often bouncing out of his seat to take a photo or say hello to an acquaintance.

But his path to budding fashion darling was hardly typical. Born in 1991, the same year as the fall of the Soviet Union, he said that for most of his early life, his town only had electricity intermittently. His family, which owned the local grocery store, would get alerts regarding when it would be available for short time periods. “The most exciting thing for me was watching a TV,” he said.

After 2003′s Rose Revolution, which marked the end of Soviet leadership in Georgia, the electricity came back for good. His parents, eager to expose him to global culture, saved up money to buy him a computer and an internet connection: by 2005, he was watching “MTV all the time,” going on YouTube and cramming in episodes of The Simple Life, the now-infamous reality television show starring Paris Hilton and Nicole Richie.

“Then the flights started coming in from Europe, and we started drinking Starbucks,” he said.

It would be about another 10 years before fellow Georgian Demna (formerly Demna Gvasalia) launched Vêtements, but by then, Gvishiani was already devoted to fashion. Style Not Com’s rise has fuelled his dreams, and he hopes to move to Milan or Paris soon. (On his first trip to the city in 2013, on a quest to buy a pair of Valentino rock stud sneakers, he vowed he would live there one day.)

As for a business model, at first Style Not Com did not have one. “I didn’t take a single cent, I’m being 101 percent honest,” he said. In February 2022, after he swapped his signature cobalt blue background for Bottega Veneta-inspired green to announce Matthieu Blazy’s first show at the Italian house, another brand reached out to see if he would do the same for them — for a fee. He declined. “It didn’t feel natural,” he said.

Now that’s changing. Gvishiani has begun taking on consulting projects linked to major luxury labels, mostly advising on social media strategy but also doing paid posts on Style Not Com. He doesn’t label these as sponsored, saying that in Georgia, where his business is registered, content creators are not required to disclose paid advertisements. If he does move his business to France or Italy, where legal requirements are different, it would be another story and could alter the way he operates.

Instagram is destined to remain Gvishiani home base for the time being, but his ambitions stretch beyond the platform. “One day, I know I will have a print edition,” he said. “I’m still obsessed with print.”

By Special to the AFRO In just two weeks, the Baltimore region has transitioned from “medium” to “high” on the CDC’s COVID-19 Community...

For the last two years, fashion brands have unleashed a steady drip of metaverse experiments and experiences. Virtual fashion shows helped brands both...

Minnie Driver on Raising a Teenager, Embracing Her Curly Hair and the Advice She’d Like to Give to Her Younger Self

In what is kind of an a-ha beauty collab moment, healthy-hair staple Joico has teamed up with Minnie Driver to celebrate the...

How To Manage Your OCD: A Comprehensive Guide to a Common Mental Illness

by Jamal Asskoumi, Sponsored PostPeople with obsessive-compulsive disorder frequently struggle to manage the challenging symptoms of this mental illness. The disorder is difficult...