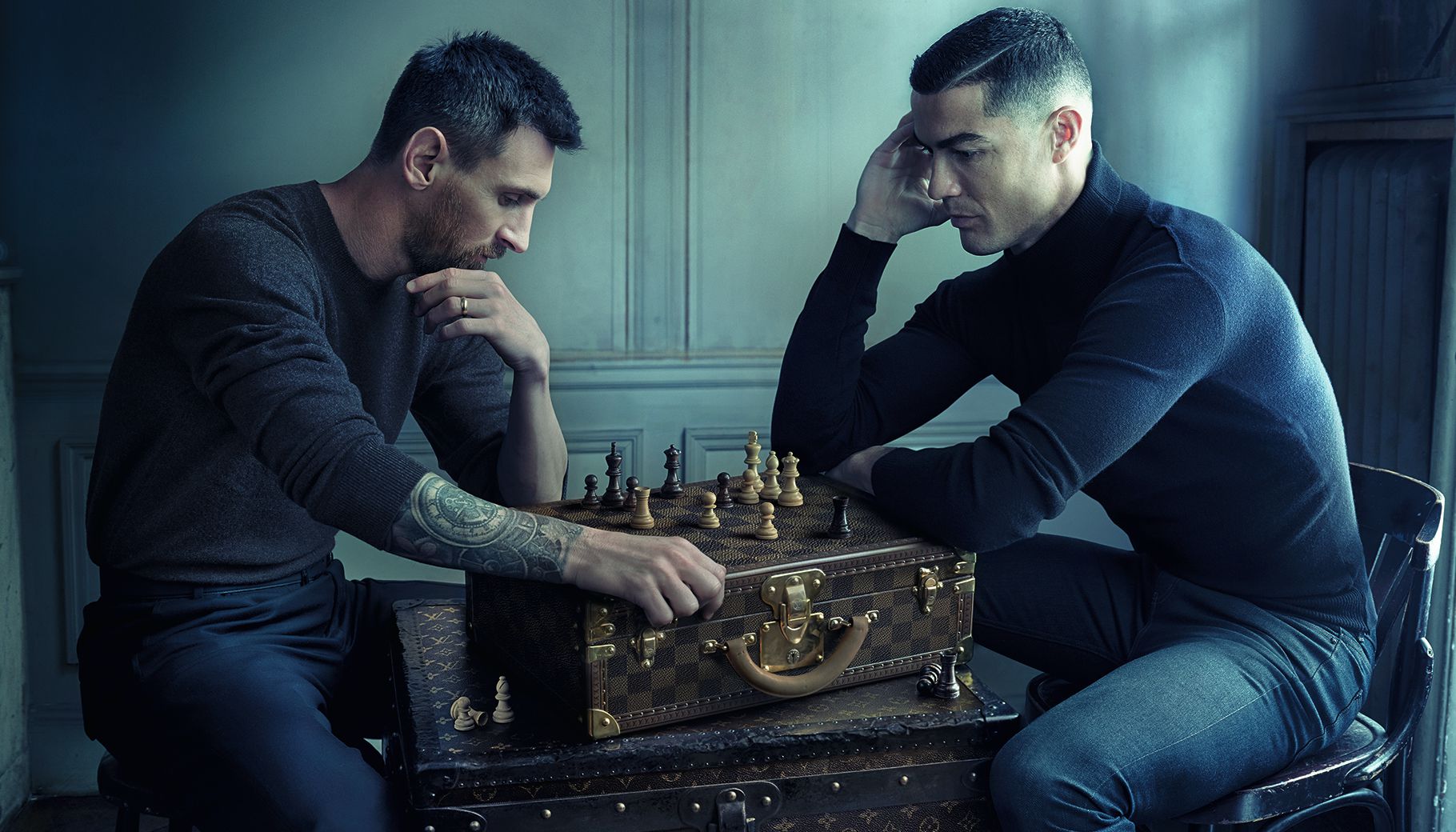 Louis Vuitton’s latest luggage campaign has been hard to miss.

Released Saturday on the eve of the FIFA World Cup in Qatar, the Annie Leibovitz-lensed image of football superstars Cristiano Ronaldo and Lionel Messi locked in a friendly game of chess exploded on social media. By Monday, Louis Vuitton’s tweet of the image (captioned “Victory is a state of mind”) had been reposted over 55,000 times. On Instagram, Ronaldo and Messi both shared the image, clocking up a total of 65 million likes, the most in the platform’s history.

At one level, the campaign’s success came down to numbers. Ronaldo has Instagram’s most popular account with over 500 million followers. And only a brand with Louis Vuitton’s marketing budgets could deliver the shock and awe of featuring not one, but two of the world’s top footballers in a single image.

But the image also had canny emotional resonance. Both Ronaldo and Messi have said they plan to retire from football soon and the 2022 World Cup will likely be their last. Imagining the longtime competitors bringing their rivalry to the more contemplative and mature arena of chess clearly struck a chord.

Displays of sportsmanship and mutual admiration tend to provoke strong reactions: tennis greats Rafael Nadal and Roger Federer long elicited glowing coverage for their affectionate exchanges on and off the court, culminating in a highly emotional (and much shared) match earlier this year as Federer prepared to retire from the sport. It’s the kind of moment brands like Louis Vuitton dream of being associated with — so why not create one?

Chess fans also noticed that the state of play in the campaign matched an iconic 2017 showdown between chess champions Magnus Carlsen and Hikaru Nakamura, adding a layer of intrigue and topic for online buzz.

Louis Vuitton’s campaign deftly managed to tap surging interest in football ahead of the World Cup while sidestepping the controversies associated with the event, from Qatar’s ruthless treatment of LGBTQ minorities to its exploitation of migrant labourers (of whom thousands are estimated to have died during the construction of World Cup stadiums). Sportswear giants like Nike, Adidas and Puma (who together dress more than 80 percent of teams), beverage partners like Budweiser and Louis Vuitton itself (which has produced a special trophy case for the event since 2010) have been unwilling to pull back their participation in the hotly watched tournament.

Louis Vuitton is doing its trophy case partnership again this year, as well as selling a World Cup-themed capsule collection. But it has posted about neither of those activations on Instagram — nor will it need to should the bad buzz on Qatar fail to subside. With the chess photo and resulting media coverage, the brand already garnered online buzz worth an estimated $13.5 million in just 48 hours, Launchmetrics said. That’s more than twice as much as Adidas’ recent tie-up with K-Pop supergroup Blackpink, and around 40 percent higher than the initial buzz surrounding Versace’s “Jungle dress” revival with Jennifer Lopez in 2019, according to data from the consultancy.

A Louis Vuitton spokesperson declined to comment on the controversy surrounding this year’s World Cup, or to say how much the sponsorship by Messi and Ronaldo had cost.

In an uncertain economy, Louis Vuitton seems to be investing more than ever in reinforcing its broad-based appeal, showing well-known ambassadors with timeless pieces that are unlikely to go out of style. The campaign by Annie Leibovitz is an aesthetic callback to the “Core Values” series she shot for the brand from 2007 into the 2010s, which promoted Louis Vuitton’s monogrammed luggage alongside distinguished faces like Russian statesman Mikhaïll Gorbachev, film directors Francis Ford and Sophia Coppola and football greats Pelé, Diego Maradona and Zinedine Zidane. Those ads aimed to rebalance perception in favour of the brand’s historic territory of travel and craftsmanship after having pushed into pop culture and fashion under designer Marc Jacobs.

“This kind of advertising isn’t about the specific product but for the brand allure,” said London-based luxury consultant Mario Ortelli, who called the new campaign a ‘masterstroke.’ “It’s about appealing to a very broad consumer base with a message about heritage and exclusivity that is relevant to everyone,” he added.

The blockbuster luggage placement could help defend Vuitton’s marketing territory as the brand of travel after a key rival, Kering-owned Gucci, has sought to promote its own monogrammed duffles and suitcases in a major marketing push fronted by Ryan Gosling.

The Messi and Ronaldo photo opp also raises awareness of Louis Vuitton’s Damier Azur checkerboard motif, a best-selling signature for which the brand has repeatedly lobbied for trademark protection with mixed results. While competitors have claimed the checkerboard is too commonplace to be eligible for trademark status, Vuitton argues that its long history of investing in marketing the pattern makes it a brand signature worthy of protection. In October, the European Union’s Intellectual Property Office said Louis Vuitton had failed to prove “distinctive character acquired through use” throughout the EU.

Disclosure: LVMH is part of a group of investors who, together, hold a minority interest in The Business of Fashion. All investors have signed shareholders’ documentation guaranteeing BoF’s complete editorial independence.

The luxury apparel and accessories markets are hotter than ever, largely due to the ease of online shopping and the rapid pace of...

China’s Pinduoduo Inc on Friday reported better-than-expected quarterly revenue, as more people shopped online due to a resurgence in Covid-19 cases in parts...

I know that there are few things that divide people as much as whether being a morning person makes you more productive. Let's...

Dress is the main trend every summer. It will be comfortable in it both...