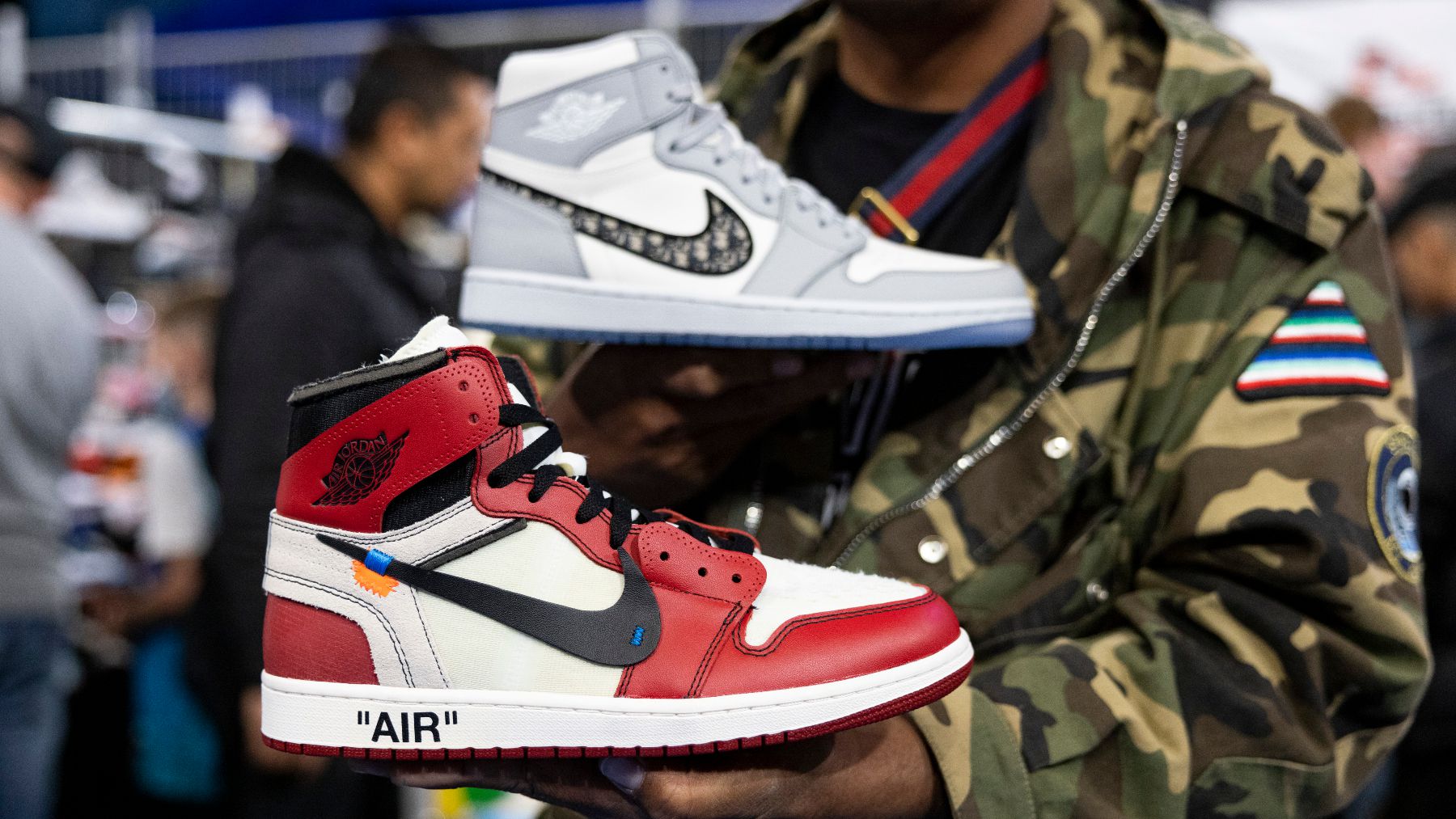 Shoppers right now may be rethinking how much they’ll spend on rare sneakers, but Kick Game, a UK-based reseller, is investing in a future where everyone is hunting for Dunks and Yeezys.

By next year, the company plans to open at least three stores in the UK on top of its current four, plus a flagship in Milan. The physical shops help bring in the older customers who are behind more and more sneaker sales, said Alicia Thompson, the company’s chief executive.

Visions of parents and kids shopping for Jordans together are helping the resale market through a correction that’s bringing prices down from their recent astronomical highs. Soaring inflation and rising interest rates have hammered the value of speculative assets of all sorts.

Sneaker prices haven’t crashed like NFTs or meme stocks. But they aren’t immune to forces in the wider economy. The new Travis Scott Jordan 1 Low or Nike’s Air Force 1 collaboration with Louis Vuitton still command eye-watering prices. But beyond that elite tier, shoes in the resale market are fetching less than they used to. Last month, the Wall Street Journal also reported that resale values have fallen.

“While the price of some styles may have dropped and we may be sitting on [more inventory than before], our long-term view is that the market will continue to grow and increase in popularity,” Thompson said.

Before that happens, sneaker resellers have some additional challenges to overcome.

Supply-chain disruptions threw off the carefully managed distribution of brands such as Nike and Adidas, said Dylan Dittrich, author of the 2019 book “Sneakonomic Growth” and head of research at Altan Insights, a data and research provider focused on alternative assets, including sneakers.

Maybe more concerning is the sense of fatigue sneaker insiders say has spread among shoppers faced with too many releases that are too hard to get.

The risk isn’t so much to companies like Nike and Adidas whose products feed resale. Their releases continue to sell out, even if the resale premium has dwindled, and they make a large share of their sales from the sort of everyday shoes people wear to mow the lawn, not flip for a profit. The question facing resellers, from teens stockpiling Yeezys in their garage to big players like StockX or GOAT, is whether the dip is a momentary stumble in resale’s boom or a sign that aftermarket prices might finally, at long last, be moderating.

“I think we’re past the peak,” Dittrich said. “Over the past few years, it’s like basically every sneaker drop sells out and sells at a premium, and I don’t think that was sustainable at the end of the day.”

Scarcity is key to how sneaker brands create demand for the handful of mostly retro styles that drive resale. Companies like Nike long ago realised they could keep shoppers returning with a steady stream of limited-quantity drops, allowing individual products to stay exclusive while selling lots of shoes collectively.

Sneaker hype, fuelled by celebrities and an endless series of hard-to-get releases, has also gone mainstream. Even talk-show host Dr. Phil wears Yeezys now. As more buyers entered the market and more resellers turned to methods like automated bots to grab scarce shoes, it created intense competition for new releases, which often happen through online draws. But complaints about the difficulty of getting sneakers have been growing louder, bubbling up with every big drop on Twitter and other online forums.

The situation has landed on Nike’s radar. “We are at risk of losing our most sneaker-obsessed consumer,” read a slide from an internal presentation obtained by Complex that sought to address the perceived unfairness of releases on its popular SNKRS app.

Shoppers still queue up because getting shoes at retail through SNKRS or sneaker boutiques feels like a bargain, if not winning the lottery. But there’s also a constant stream of run-of-the-mill releases lacking the rich storytelling needed to stand out, Dittrich said. Many get listed on the secondary market, where there’s already a huge volume of shoes that haven’t found end consumers.

It’s these shoes facing challenges right now. As of this writing, some sizes of the Jordan 1 Dark Marina Blue and Jordan 1 Heritage are trading below their original retail prices on StockX, while the Nike Dunk low UCLA, which retailed at $100, is going for around $150.

“Typical sneaker releases like Air Jordan 1s, Yeezy 350 v2s, Nike Dunks, during the pandemic and slightly after, those shoes were reselling for $200 all day,” Anthony, co-founder of the sneaker intel source The Site Supply, who asked to be identified only by his first name, told BoF.

Earlier this year, The Site Supply noticed the affiliate links it shares with more than 400,000 followers across its various Twitter accounts were seeing less activity. Conversions through those links on StockX and consignment sites were “quite a bit lower,” Anthony said.

StockX acknowledged that prices of some shoes have fallen but said transactions on its site are up in the first half of 2022 compared to the same period last year. It also said many shoes still carry high premiums. Of the 100 top-traded sneakers on the site in 2021, 63 have since increased in value, it said.

The Air Jordan 4 White Oreo, for instance, which released to the public in July 2021, is generally selling for about $100 more than this time last year, according to the price history StockX displays on listed shoes.

Though that’s actually down from earlier in the year.

It could mean that, while smaller businesses and some individual sellers find it harder to make money flipping shoes, resale’s biggest players are set to get even bigger.

“I think what we are seeing here is that web traffic and search trends for StockX and GOAT are still quite healthy and top-selling SKUs are not seeing the declines in volumes and pricing that others are,” John Kernan, a Cowen research analyst, wrote in an email. “We continue to see StockX and GOAT as the leaders scaling the industry.”

Small and medium-sized companies, which don’t have the same volume of sales to rely on, could be at greater risk if resale values continue to slide, though some say they haven’t felt any decline.

Kicks Crew, a Los Angeles resale company, “hasn’t yet noticed any decrease in sales,” according to co-founder Ross Adrian Yip. The business positions its product offering away from the high-end resale market and 80 percent of its customer purchases are for products released longer than 30 days ago, meaning Kicks Crew shoppers aren’t looking for the most hype-driven or exclusive sneaker drops, Yip added.

For long-term success, key players are investing in scale to survive. The risk is that if the market doesn’t recover, resellers could be stuck with warehouses full of sneakers nobody wants.

This autumn should reveal if resale prices will rebound, as the release lineup includes several eagerly awaited colourways, such as the yellow-toe Jordan 1s and the rumoured drop of the green Off-White x Nike Air Force 1s, according to Anthony of The Site Supply.

It all depends on how much demand there is for the supply.

“For hyped styles, the majority of people would still try to buy [on the drop] as you know your money will be worth more than what you paid for them,” said Vivian Frank, a high-profile collector based in London who runs two Facebook forums where about 300,000 combined followers get information about sneaker drops or buy and sell products from collaborations by Ye, formerly Kanye West.

Based on the activity in these forums, Frank believes demand for the most-sought styles won’t be affected by rising costs of living and inflation in the US and UK, though he anticipates “some shoes dropping in resale price due to lower spending power and oversupply.”

Royal Ascot is in full swing, and Prince William and Kate Middleton ...

Leave The WebHosting to DoRoyal

Those who own websites or web domains know just how valuable the service is to their ventures.  For those less familiar with the service, web...