Farfetch, Outlier Ventures accept entries for next Dream Assembly Base...


In hindsight, this was inevitable. Ever since Mad Vlad Putin was snapped pumping iron in a pair of £2,000 Loro Piana joggers, we’ve been moving inexorably to the day when men could wear matchy-matchy sportswear for activities other than rolling snitches into the East River. To Armie Hammer in Adidas Originals, 2 Chainz in full-look and Alex Turner in his bespoke, baby blue number from Aussie designer Ray Brown.

It’s a weird and wonderful world, but we’re onboard. Menswear offers up its share of ridiculous trends, but few that have comfort so baked in. And as with almost everything we wear these days, you can thank rap for that. “The tracksuit trend partly stems from the rise of the word ‘cozy’ as an adjective in terms of a clothing aesthetic, from around 2013 onwards,” says Andrew Brines, buyer at Oki-Ni.

For proof, peep the A$AP Mob’s Cozy Tapes, the first of which opens with an ode to being, “sweatsuited up […] terry cloth and all that shit”, before flipping rap’s normal braggadaccio script as Juicy J and A$AP Rocky do battle over whose wardrobe is snuggliest. “Came through with the real good, goose-down bubble jacket with the snow boots […] Outfit so fly, fell asleep before he left the house.”

The tracksuit is that sentiment dialled up, a flex that says you’re so beyond dress codes, expectations, social decorum, that coziness is all you care about when perusing your wardrobe of a morning. As Seinfeld’s George Costanza once dreamed, “I would drape myself in velvet if it were socially acceptable.” Thanks to hip hop and Alessandro Michele, two decades on, it is. 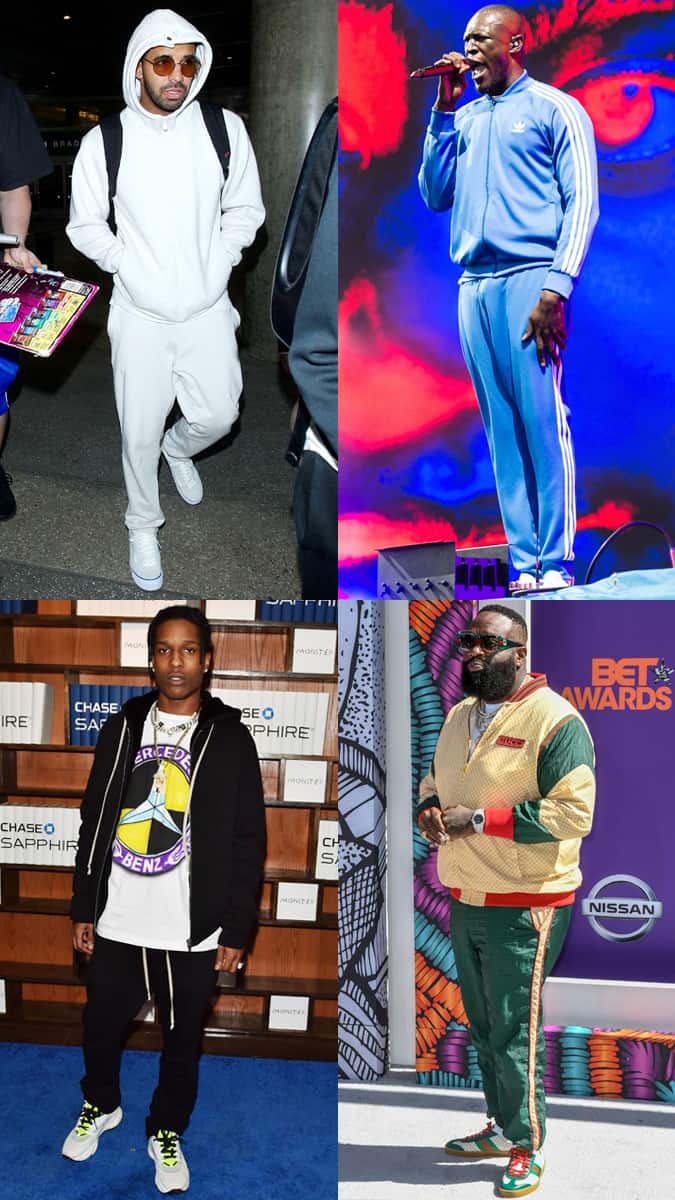 A few trends converge in the tracksuit, the big one being athleisure, which has morphed from wearing Air Max with your suit into going to work dressed like a football coach. But there’s also fashion’s current obsession with the 70s and the 90s, two decades that saw sportswear transcend, y’know, sport, and grime’s second wind, which saw kids in trackies take over the charts.

Because, of course, sweatsuits never left – they were just out-of-bounds once they’d become the uniform for weed-slinging kids round the back of the supermarket. Until, at the turn of the 2010s, they inspired a slew of men who were suddenly sick of their double-monks to dress all the way down, to distinguish themselves from all those (other) Pitti poseurs.

“Menswear entered a new phase, dominated by synthetic materials, sportswear and the notion of being comfortable in one’s clothes,” says Brines. “But tracksuits’ popularity didn’t happen overnight.” First came luxury cozy, courtesy of Tomas Maier at Bottega Veneta, which trickled-down and morphed from cashmere into polyester. As designers sought ways to keep pushing the envelope, we got side-stripe trousers, drawstring suits and finally, inevitably, a wholesale embrace of the head-to-toe tracksuit. 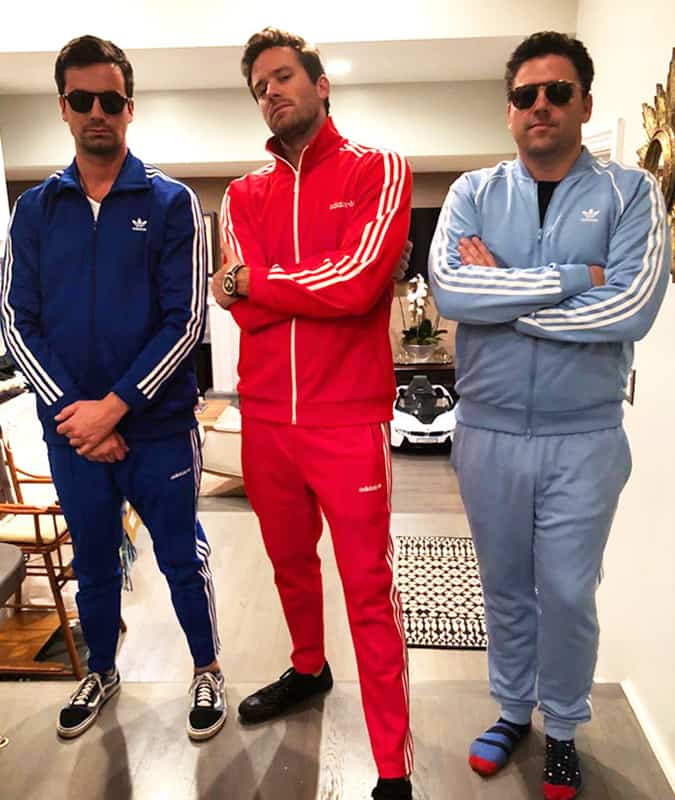 That said, we’re still near the bleeding edge here and the full-look look is riddled with tripwires. “For a first step, wear it as separates,” says Brines. “Second, don’t wear tight-fitting trousers. Some of the 70s poly tracksuits form the outline of one’s genitalia and no one wants to see that.” Channel that roomier, 90s silhouette instead. Thirdly, expect to weather comparisons to Tony Soprano.

OK, sure, you’re not actually going to wear your tracksuit for sport. But brands with sweat in the DNA have attempted to de-ridiculise them by cleaving tight to their OG function. Tommy Hilfiger and Perry Ellis went all Olympian in their SS17 collections, with red, white and blue tracksuits that would look as good in the garden or parading around an opening ceremony. The trick here is to wear yours with other sporty-not-sportswear staples, like trainers you’d never take near a treadmill, or plain black hoodies in fabrics too nice to spoil in a gym. Just steer clear of the sweatbands, Chas Tenenbaum. 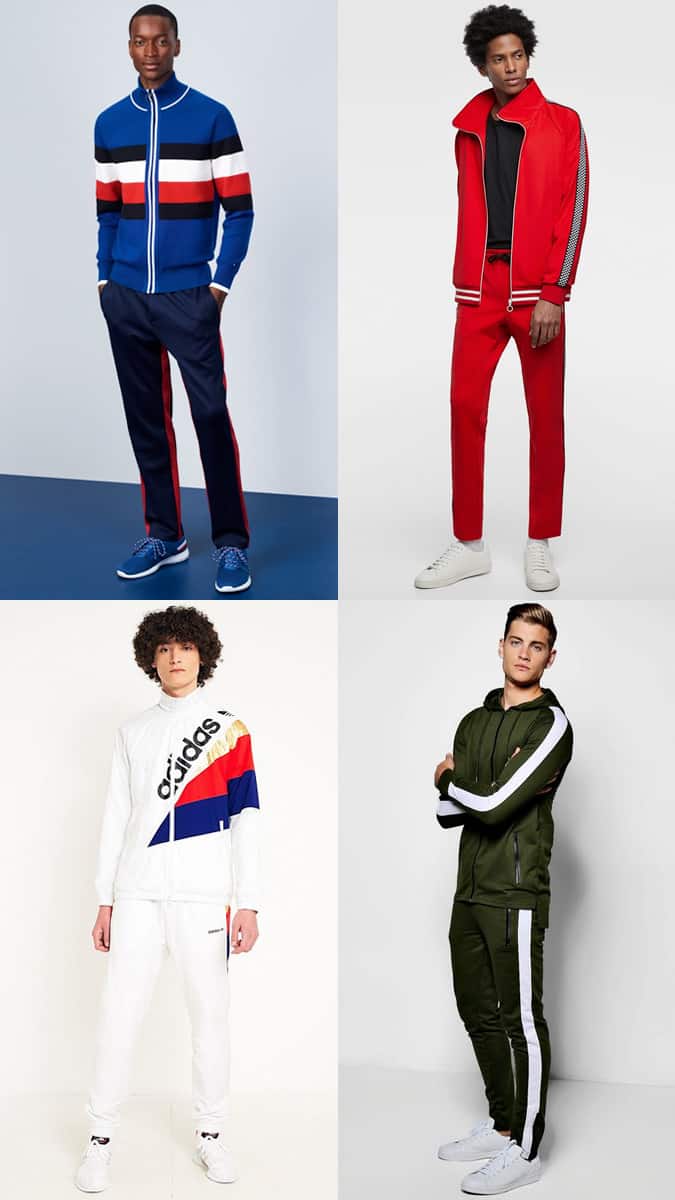 Fashion’s current penchant for putting logos on any available surface has found particular fruit in the tracksuit, since for canny designers it’s basically a head-to-toe block of background. ‘s versions are particularly egregious, unless you’re a fan of interlocking Gs covering your entire body, but down near the accessible end you can embrace similar branding by taping legs and arms in Adidas’s stripes, or ‘s swoosh. The sportswear boom’s also been manna for so-terrible-they’re-cool-again brands; if you want to rep your love for Kappa, Ellesse or Sergio Tacchini, you’re spoilt for choice. 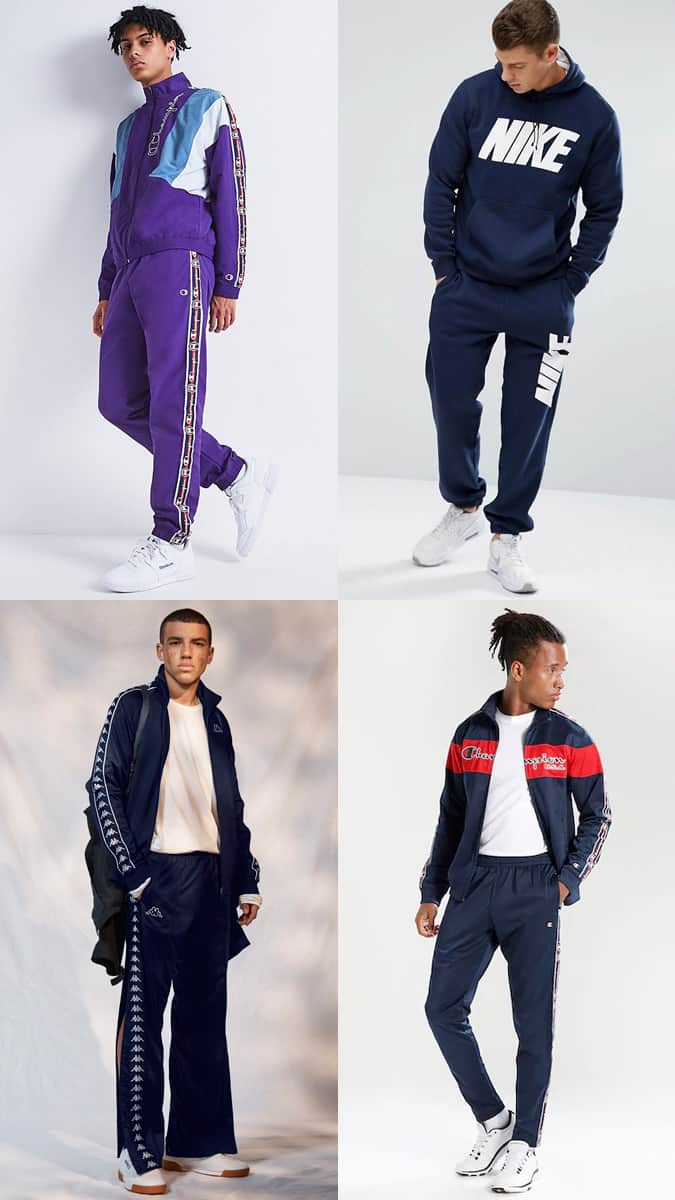 If you’ve got the leisure time to spend your Wednesday queuing outside Supreme, odds are you don’t own an actual suit. The tracksuit fills the gap, offering as much clout as something from Savile Row did for your dad, for a (slightly) more reasonable price. Supreme’s the don, of course, although best get your bots ready to stand any chance of copping both parts. But Palace’s hook-ups with Adidas, or premium sweatsuits from brands like LA’s Palm Angels and Japanese brand Needles (which was among the first to tap the trend, back in 2014), are ideal anytime you need to stunt on some fuccbois. 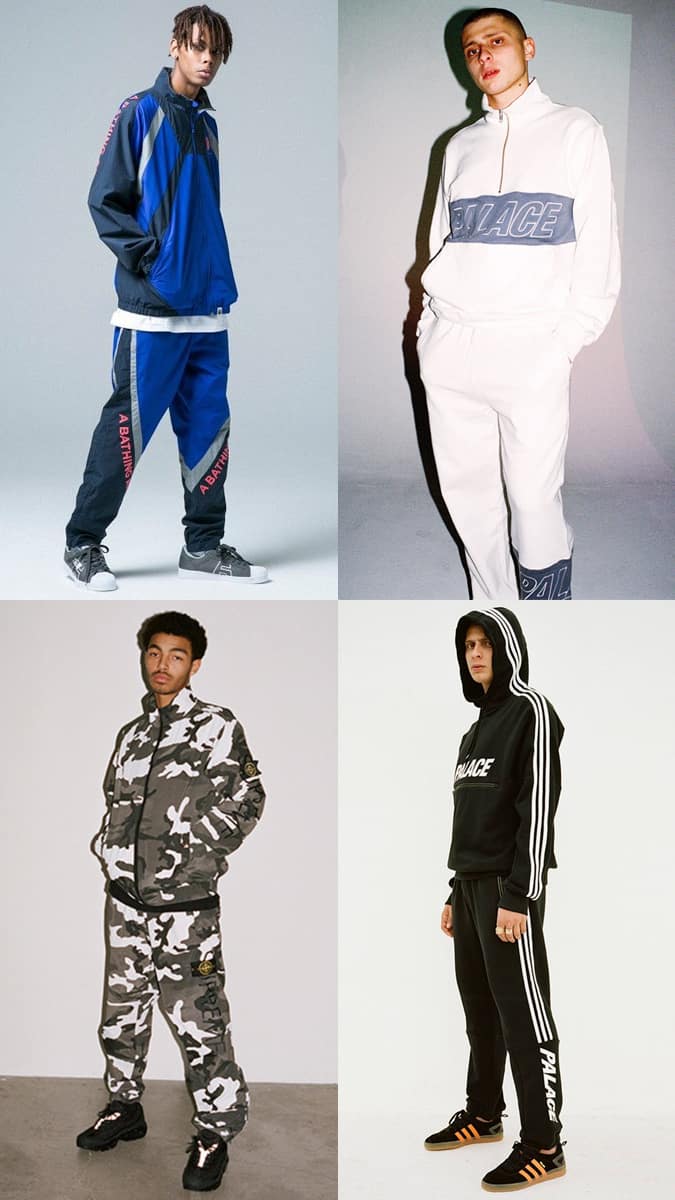 Think Run DMC then, or Armie Hammer now, who until he retired the look this year had 70 in rotation. It’s all about brands with on-the-pitch cred – , Adidas, Umbro – worn in ways that say, “I could do a Cruyff turn right now but I’ve got places to be.” To pull this off, it helps to have a body that backs that statement up – if you’re carrying a few extra then this look quickly tips into Mafia not-quite-made man. 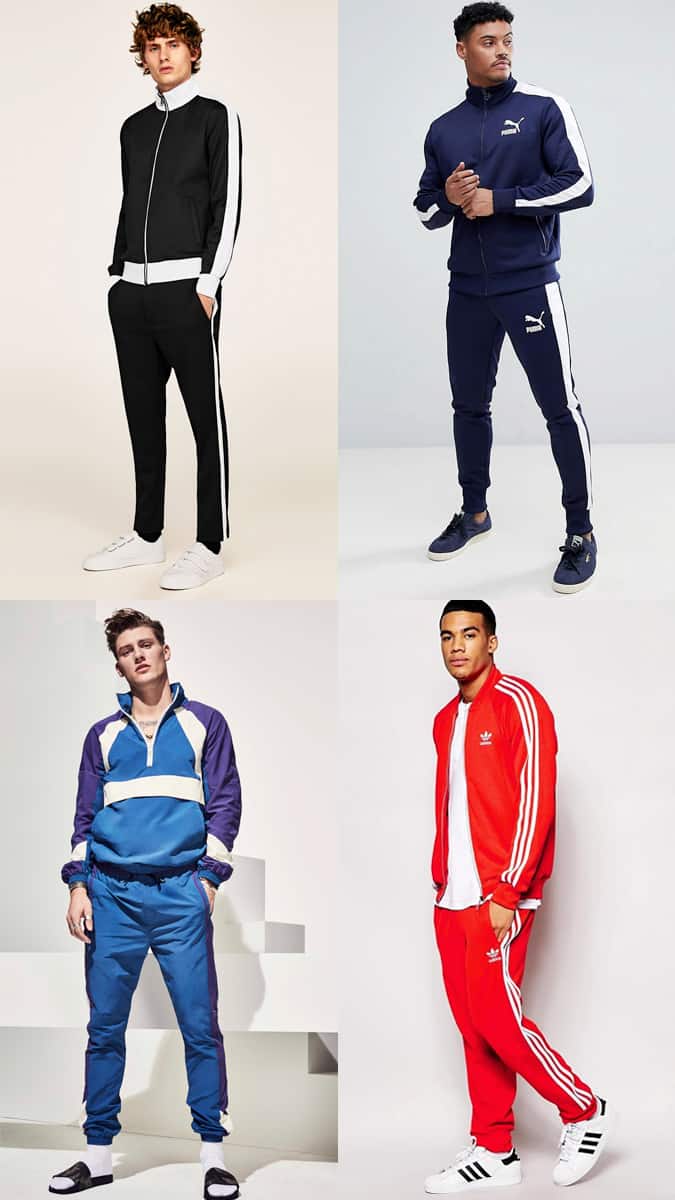 Part of the tracksuit’s appeal is how tapped out it looks from the concerns of everyday men. In a world in which you can wear anything to work, odds are you still can’t wear a tracksuit. So for anyone who does, because their work entails posting to Instagram from a private jet, the tracksuit is a badge of honour, a sign that you exist on a different plane. For this to work, your sweatsuit needs to cost more than an actual suit – is the go-to, but Balenciaga also does a neat line in logo-emblazoned, first-class-loungewear. Accessorise with a selfie stick and then boast about your air miles. 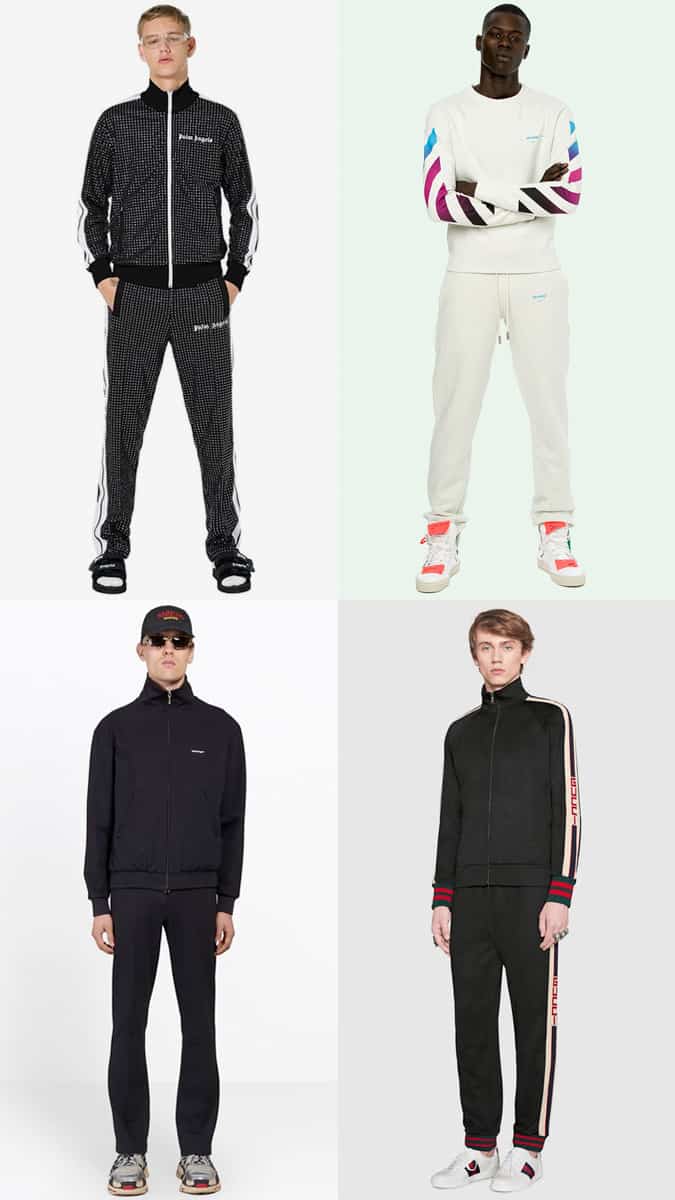 The Best Tracksuit And Sweatsuit Brands

Why look further? The three stripes’ tracksuits spent the 00s propping up Sports Direct, but are now a legit choice for drill crews, the Made In Chelsea cast, and anyone in-between. If your tastes lean towards the former, make like Skepta and wear yours black, ideally with murdered-out logo. If you want something that’s going to pop on Instagram, then look to its collabs with brands like Alexander Wang and Gosha Rubchinskiy. 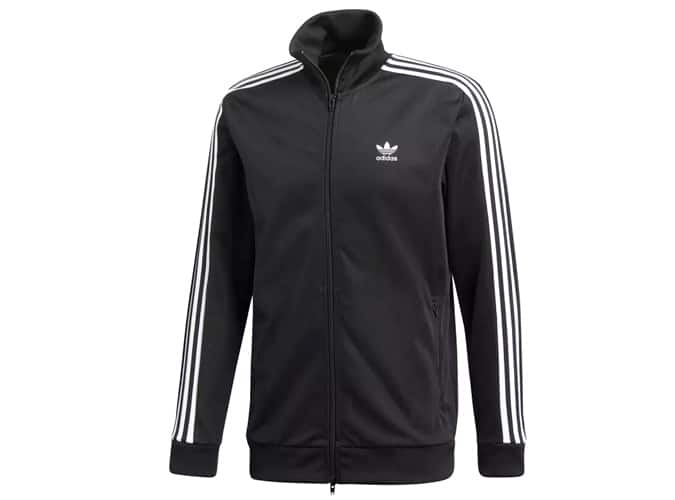 Quite how Kappa went from forgetting to celebrate its own centenary in 2016 to collaborating with what-how-much? brands like Marcelo Burlon County of Milan, we’ll never know. But either way, the Italian sportswear brand is riding high again (at least until the tracksuit bubble bursts). You don’t have to pay designer prices to cop some of that cred, though; in the UK at least, the brand’s been on fumes so long that wearing one of its standard logo-striped sets lends you look that mix of irony, nostalgia and in-the-know that’s so hot right now. 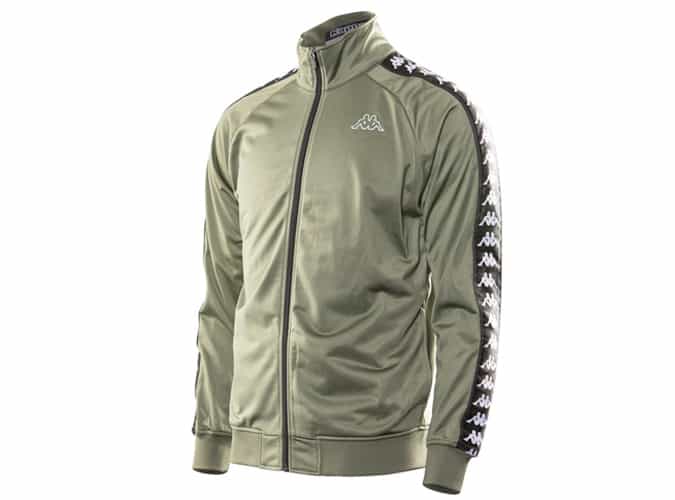 With all its sportswear bona fides, Lacoste’s tracksuits are the kind you could wear while warming up before the French Open, but the brand’s Gallic flair mean they pair just as well with a glass of chablis once the game’s over. Go for plain(ish) shades and your tracksuit will work just as well as separates, which doesn’t just give it extra life, but also means that you can break it out on those days that the full look feels a touch OTT. 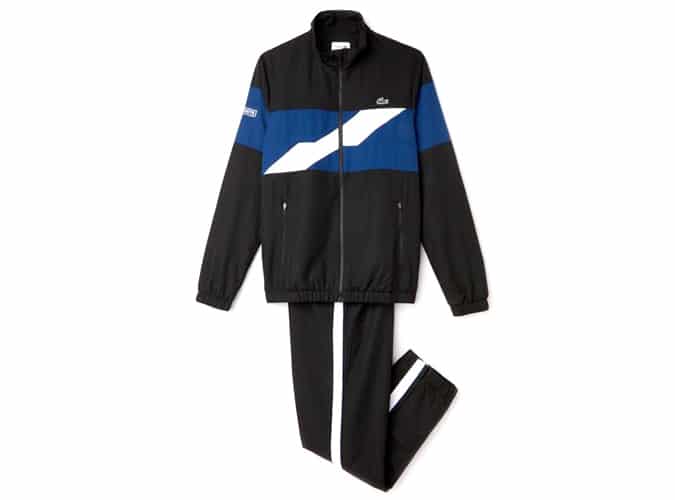 Tailor of choice to Skepta, FKA Twigs and Jamie XX, Cottweiler is the thinking man’s tracksuit brand. That’s because designers Ben Cottrell and Matthew Dainty approach sportswear with love, reimagining the clothes they wore as kids in space-age fabrics and novel new details, like elastic-cinch sleeves of sheer panels. While other brands are content to make silk joggers and stick a four-figure price tag on, in Cottweiler’s hands they evolve. If it turns out sci-fi was right and we all end up in jumpsuits, we can imagine Cottweiler crafting them. 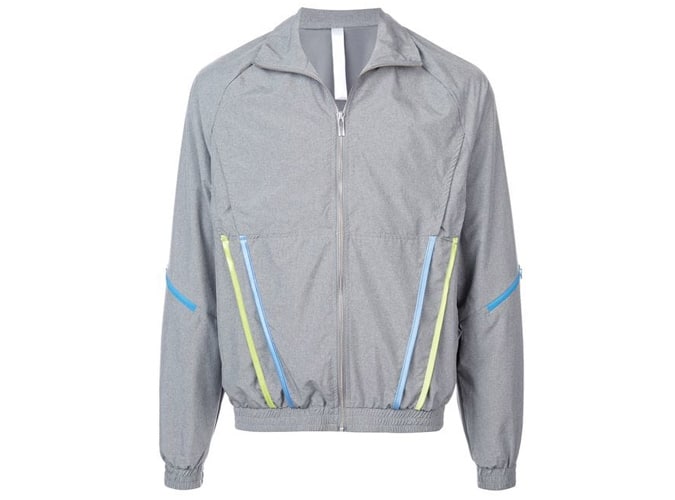 LA’s hottest streetwear brand is half California surfer, half Soho House-resident creative. Its tracksuits nail that nexus with louche cuts that you could slip on straight out of the sea, in fabrics you’d never allow near saltwater. It’s not a brand for wallflowers – head-to-toe prints on offer this season include camo, tartan and palm trees, while block colour-fans can step out in lavender or hot pink. With fans like A$AP Rocky and Migos’s Offset, they come with swag by the bucket. 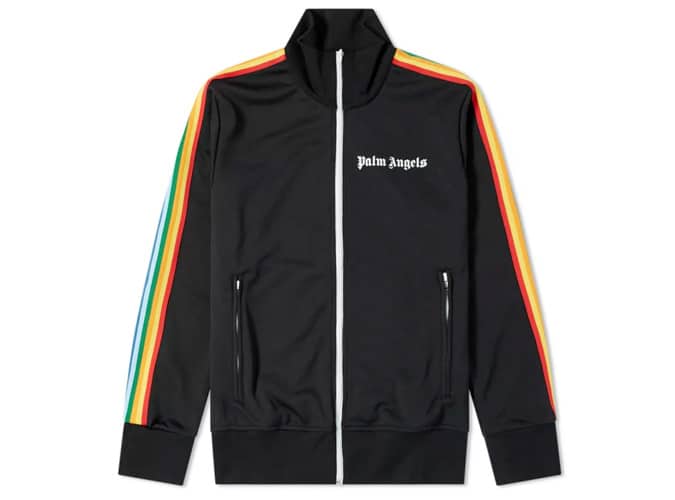 Olivia Wilde 's film Don't Worry Darling was originally being made with ...

The trial between ex-spouses Johnny Depp and Amber Heard was watched all over the...

The tail-end of the year is a high-maintenance mistress to dress for, particularly when it comes to footwear. One miscalculated choice and that...

As a seasoned rocker taking part in the Umbria Jazz Festival, Johnny Depp...