Denim: so easy to put on, and yet, so easy to get wrong. Unlike corduroy and velvet, which appear difficult (and indeed are), denim seems simple enough on the surface, but can be perilous to a man’s sartorial reputation. Take poor Justin Timberlake, for example, who still hasn’t lived down that double denim disaster some 15 years later.

When donning the most staple of workwear fabrics, the stakes are high, and each colour and wash requires an entirely different tack. With that in mind, here’s what to wear with the five most common shades to make sure you stay on the right side of history.

Unlike the other washes, what constitutes as ‘dark denim’ is up for discussion. For clarity, here we’re talking raw indigo and charcoal shades – essentially anything more or less uniform in colour that isn’t black.

As a rule of thumb, the darker the denim (and the less detailing), the better pieces lend themselves to being dressed up for more formal occasions. Yet despite this versatility, there are still a few things to consider.

Due to its relative stiffness, raw denim (which has been left unwashed after manufacturing) isn’t usually found in skinny fits. However, a slightly wider, slim- or straight-leg is no bad thing and will ensure that any early 2000s dodgy denim vibes are stopped in their tracks.

Whether combined with off-duty staples such as a sweatshirt or a blazer for a solid smart-casual mix, you’ll need to consider the balance of your overall outfit. Stiff denim tends to sit away from the body, so make sure that anything that you’re wearing up top and on your feet isn’t too form-fitting (read: no muscle-fit shirts).

While that’s off the menu, pretty much everything else is firmly on, be it colours (neutrals and primary tones work equally as well here), textures or other shades of denim. 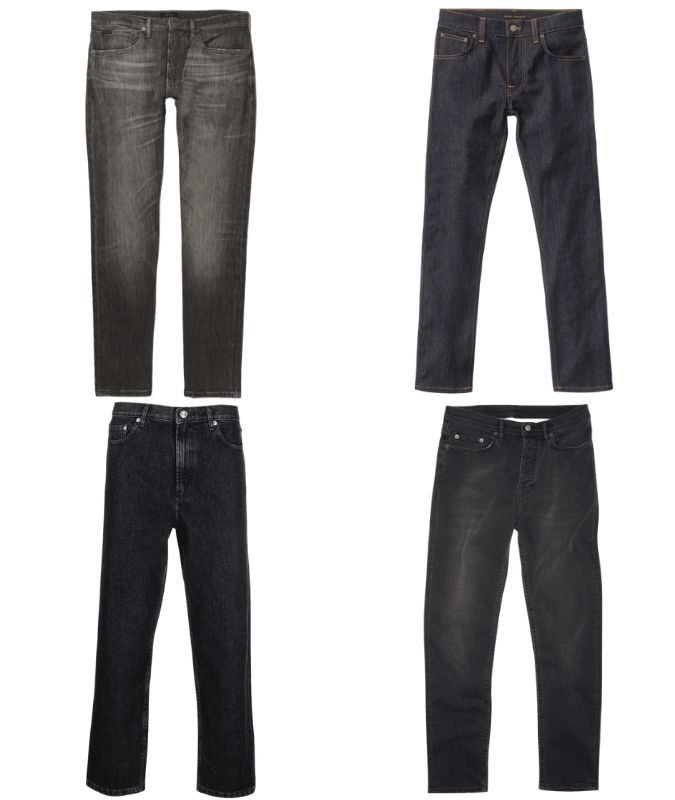 Anything with the word ‘mid’ in it is usually a bit drab. Middle-market, midlife, middling – basically it’s code for being unanimously naff. Apart from where mid-wash denim is concerned.

It’s a favourable shade of denim to have at your disposal, not least because of its ability to slot seamlessly into several off-duty looks.

Mid-wash denim has similar requirements to all other washes. Like light wash denim, it’s important not to double up without leaving at least two shades in between pieces, and just like white denim, it benefits from contrast.

Sitting slap in the middle of the denim colour spectrum can make achieving enough differentiation a pain. However, that’s where texture comes into play. If you think that navy sweatshirt could result in an outfit that resembles a mechanic’s overall, opt for a waffle knit instead. The same goes when it comes to outerwear, with a rugged suede or wool leather jacket a strong choice.

Whether you opt for navy or shades like easy to throw on grey, brown or black, above all the aim should be to keep it simple. “Mid-wash denim looks great with something as simple as a plain white T-shirt,” says Levi’s vice president of Northern Europe, Richard Hurren. “Pair with classic sneakers and roll the hem for a casual summer look.” 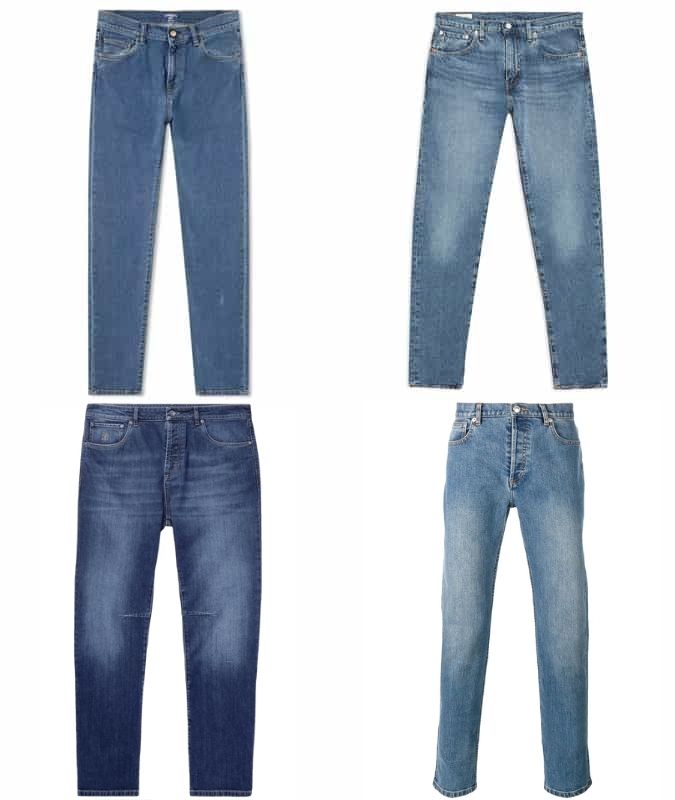 Keeping up with the fortunes of light wash denim is taxing. One minute it’s the height of bad taste, the next minute it’s having a resurgence in popularity, gracing some of the best-dressed legs and torsos in menswear.

In case you were unclear on where the style world currently stands, the consensus is that it’s cool. Thanks to the nineties trend, light wash jeans, light wash shirts and light wash jackets are all on the ‘approved’ list.

As much as light washes are having a moment, going double light denim remains firmly off the cards. That said, there are many ways to wear the shade while staying on the right side of dad dressing.

Frayed hems, boxier cuts and ripped detailing all nod to skate clothing, especially when worn with pieces such as hoodies or long sleeve tops under T-shirts.

Alternatively, for a more appealing everyday look, opt for relaxed fits with minimal extras and team with wardrobe basics such as a simple white T-shirt and a pair of white sneakers for a go-to high-summer look.

“I would style light denim jeans with a Breton top or a contrast colour such as light green or light grey,” says Edwin denim designer Niels Mulder. “A crew-neck sweatshirt or T-shirt also make good companions.”

If stonewash jeans remind you too much of your old man, try a jacket or shirt used as an accent to an otherwise dark outfit instead, it’s the easiest way to introduce a lighter wash into your wardrobe. 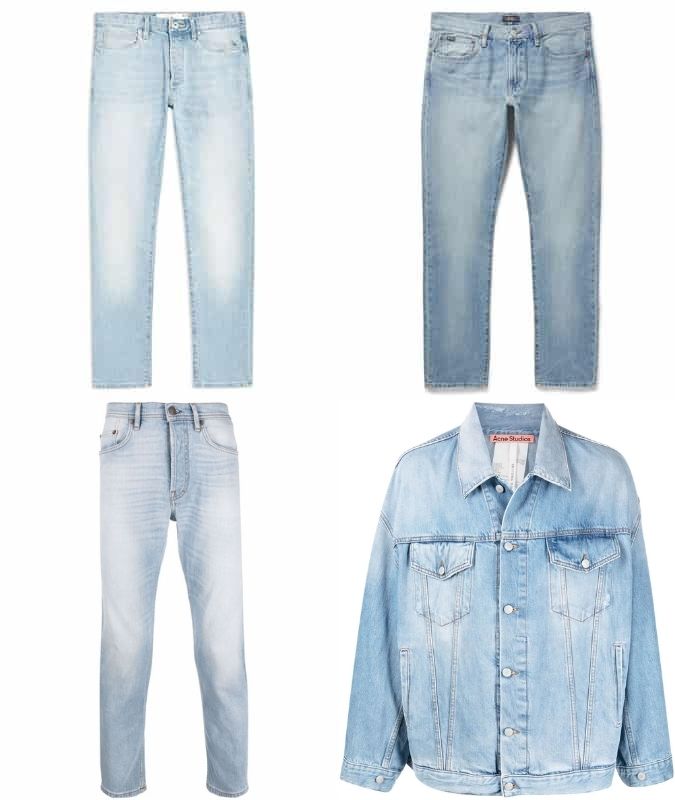 Like most items of black clothing, the darkest of denims is a low-risk, high-reward investment to make. A favourite among well-dressed musicians (think James Bay, Alex Turner and Oasis-era Noel Gallagher), the style refuses to date, proving just how essential and versatile it is.

Because of its classic shade, when bought in a sharp, almost tailored cut, black denim can act as a sub-in for practically any other piece of black clothing – from suit trousers to chinos. It’s not all plain sailing, though.

Whereas relaxed-fit light wash jeans can look charmingly nineties, black jeans have a peculiar tendency to err a little too close to emo teenager when worn wide. Similarly, skintight spray on black jeans will either veer lads holiday or post millenium indie rocker; so always go straight leg to be on the safe side.

While there’s no beating an all-black look, it also makes a perfect anchor for bolder hues. Got a primary colour sweatshirt you’re itching to wear? Team it with a pair of black jeans for a fail-safe look. Likewise, layering an on-trend pastel tee underneath a black denim jacket will help reduce its impact for those looking to branch out from the safety of neutrals.

Not quite ready to take the technicolour plunge? Camel and black is a timeless and foolproof colour combination that always looks sophisticated; try pairing a camel overcoat or suede bomber with your black jeans and a white T-shirt for an outfit that will never date.

“For a casual look, wear faded black denim jeans with a white T-shirt and an open check shirt,” suggests former Topman creative director Gordon Richardson. “This way you can button up the shirt if you need to smarten up. Or pair a crisp white Oxford shirt with black jeans then add a blazer and smart boots if you’re worried that you won’t look smart enough.” 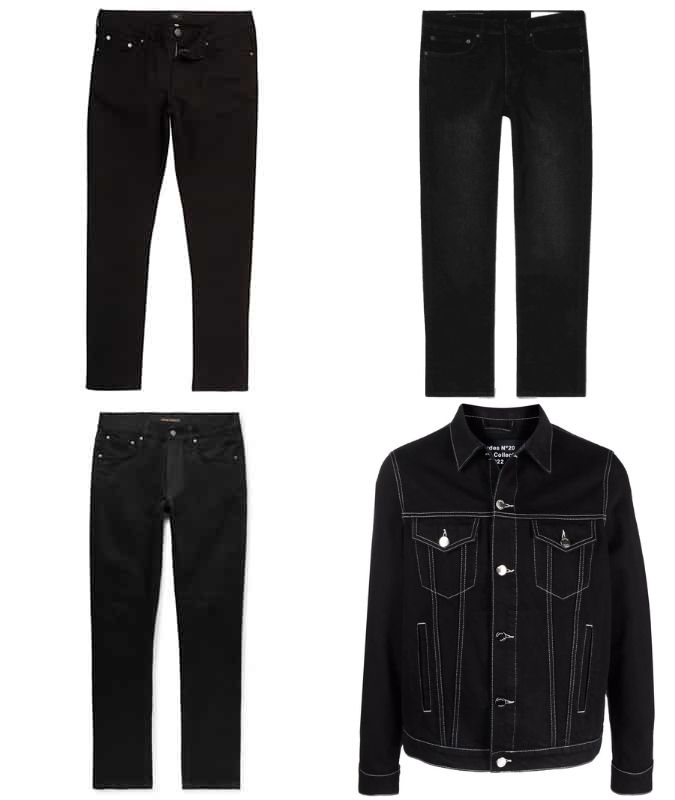 Style is often about stepping outside of your comfort zone, and there are fewer better ways to do this than with white denim.

Aside from wearing it without looking like The Man from Del Monte, one of the main concerns here is ensuring what you wear remains the intended shade. While we can’t help you keep coffee in its cup or food on its fork, we can simplify the process of getting dressed by giving a few suggestions of what to wear it with.

Sure, white denim looks great on tall, tanned sorts, but if you’re not a beanpole or are worried about being washed out, it’s not off-limits. Go for almost white denim in stone, cream or off-white, which are all more forgiving on body types and skin tones than a stark shade (not to mention slightly easier to keep clean).

Not up for jumping in legs first with jeans? A white denim jacket is a the perfect way to ease in; worn with black trousers or raw denim, it’s nigh impossible to get wrong.

If plucky enough to go the full Mick Jagger, the team at menswear etailer The Idle Man, suggests wearing them with classic staples in light neutral colourways.

“White jeans make a great base to work other pieces around, so start with these and add in a black or grey T-shirt, a pair of sand desert boots and a stone or khaki field jacket.” 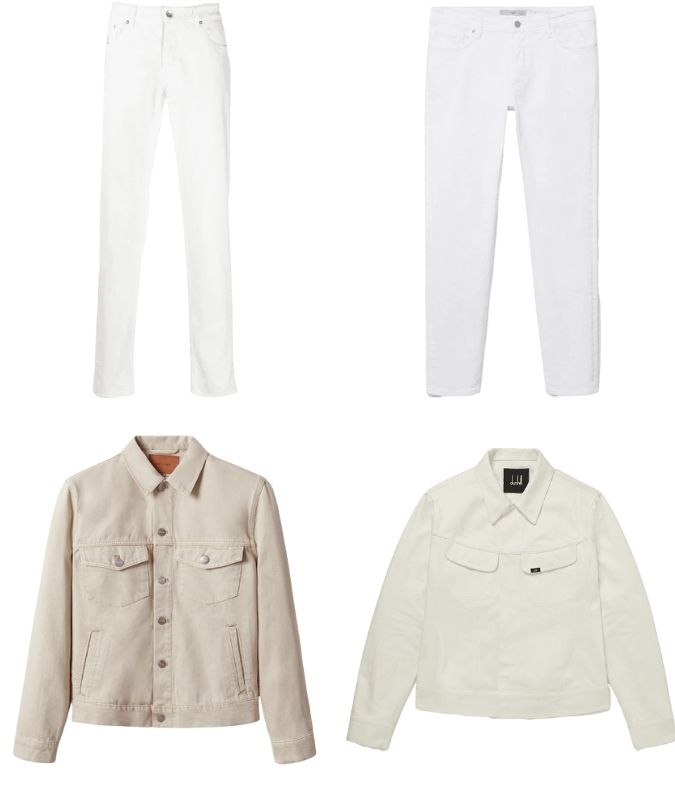 This Waver Gives You Mermaid Hair in 10 Minutes or Less

Last year saw the rise of mermaid hair on Instagram and TikTok—the hashtag had millions of views—and it’s such a fun, easy style,...

PlayStation VR2 gets some of the Quest 2’s best features

Sony has revealed new features for the upcoming PlayStation VR2 headset, including see-through view and broadcasting. The PS VR2 headset is set to be...

This past weekend, the singer for Truth Hurts got into the Halloween spirit in...