The Best Shampoo For Men You Can Buy In 2022

16 Of The Best Lounge Pants For Men To Really...

12 Of The Best Hair Putty Options to Get You...


Like it or not, chunky sneakers are here and they aren’t going anywhere. Not that they could even if they wanted to, mind you. To the casual observer, it may have come as a bit of a shock when the fashion elite suddenly appeared to be taking their style cues from Sporty Spice in a pair of Sketchers circa 1995, but it’s actually a pretty natural progression. Think of it as footwear’s answer to the loosening and widening of silhouettes we’ve been seeing in fashion for some time now.

After several years of clean, white minimalism and slim, sock-like fits in the world of trainers, it was only a matter of time before things swung around and began going in the opposite direction. The Raf Simons X Adidas Ozweego was one of the first chunky sneakers to really kick things up a gear, but it was with the release of Balenciaga’s much-hyped Triple S sneaker that this chunky sneakers craze really took flight.

The Best Chunky Sneakers You Can Buy

Okay, let’s get it out of the way. You can’t talk about chunky sneakers without mentioning Balenciaga. Since the appointment of Vetements boss Demna Gvasalia as creative director back in late 2015, the luxury Spanish label has become one of the most forward-thinking names in fashion and the now-iconic Triple S sneaker is without doubt its crowning glory.

Taking inspiration from orthotic footwear and the type of trainers favored by tourists, the Triple S eclipsed its stripped-back predecessors and quickly became a regular sight at fashion weeks as well as a grail purchase for hype-beasts and high-fashion disciples alike. 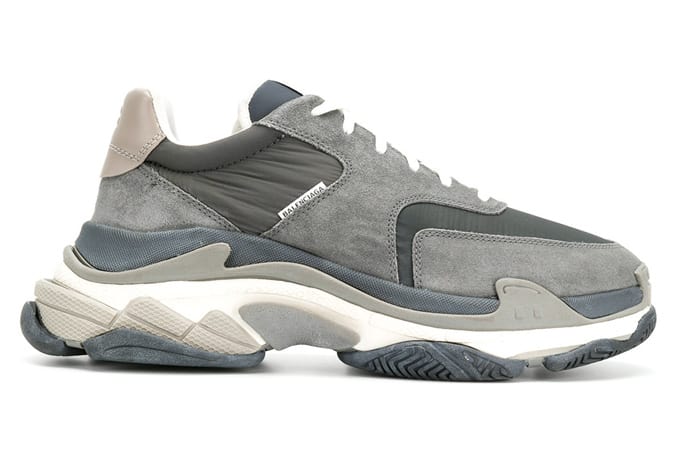 A British sportswear brand with a background in chunky sneakers. This latest trend has thrust the Bolton-born label back into the spotlight and many of the silhouettes from its archives are looking more relevant today than ever before.

This innovative shoe featuring Reebok’s ground-breaking ‘Pump’ cushioning system was first launched in 1994 but in recent years has found a place on the shoe racks of fashionistos as well as Mr Motivators. The Insta Pump Fury has been reimagined by brands ranging from BAPE to Vetements and has earned a cult-like following in the process, making it one of the coolest chunky sneakers you can have in your rotation. 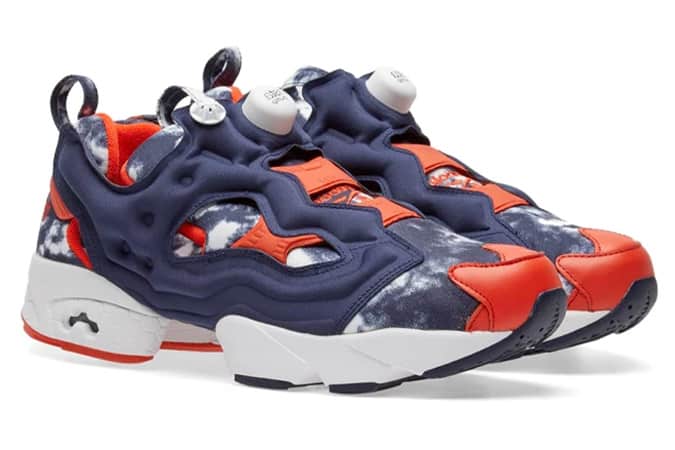 The Balenciaga Triple S may have kick-started this whole thing but would it have even come into existence if it hadn’t been for the long-running collaborative effort between German sportswear giant Adidas and Belgian tastemaker Raf Simons? Well, perhaps not.

The Ozweego III is the latest design in the ground-breaking Ozweego chunky shoes line. Maybe you love them, maybe you loathe them, but however you feel about this beautifully ugly piece of footwear, you can’t deny it’s fun to look at. 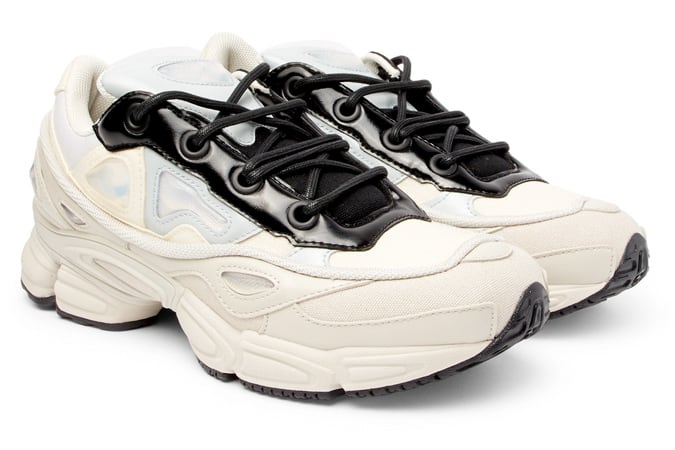 Boston shoemaker New Balance has been doing its thing since the turn of the 20th century and has picked up a few tricks along the way. The brand produces the vast majority of its products either stateside in New England, or across the pond in, well, old England. The result is some of the most comfortable, highest quality chunky sneakers available to buy – no wonder NB is such a hit with sneaker-heads and athletes alike.

Apple co-founder Steve Jobs was onto something when he picked these bad boys out as part of his signature look. A true classic and on trend. 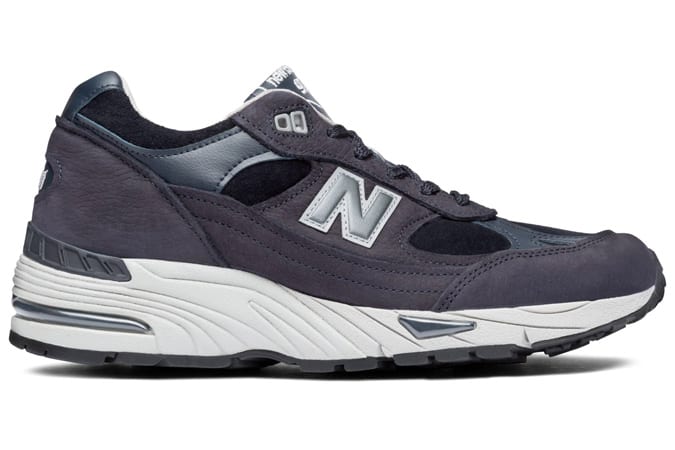 You can’t think of sneakers without thinking of . The sportswear heavyweight has been doing big trainers longer than most. In fact, some of its most iconic footwear designs – which could give the Triple S a run for its money in the chunkiness stakes – come from a time when Demna Gvasalia would still have been wearing nappies.

The Air Max 95 is nothing short of a classic and offers the perfect way to dip your toes into the chunky sneakers trend without losing any friends in the process. 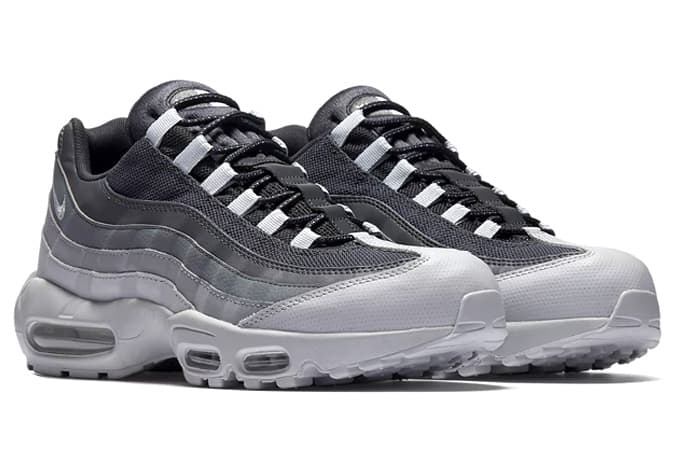 Swedish fashion chain H&M is known for bringing a subtle touch of Scandinavian minimalism to the high street, but as the fashion landscape continues to evolve in unexpected ways, stripped-back is out and OTT is in.

These highly detailed, chunky shoes from H&M are in keeping with the trend while still managing to look clean and crisp at the same time. If you want a pair of big sneaks that will go with 99 per cent of your wardrobe – quite an ask even for regular trainers – then these might be your best bet. 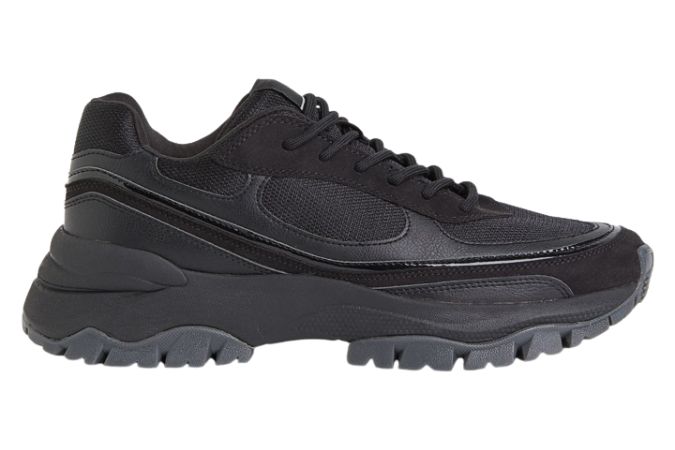 If there’s something new bubbling away in the world of fashion, you can bet it won’t be long before starts churning out its own version of whatever that may be. The trend for dad-esque footwear is no different and the Spanish high-street stalwart has already put out a number of designs.

With a thicker-than-thick sole and plenty of contrasting materials to the upper, it’s no mystery where this model took its inspiration from. However, with change left over from £50, this is one way to keep abreast of the chunky shoes trend while ensuring your wallet remains intact. 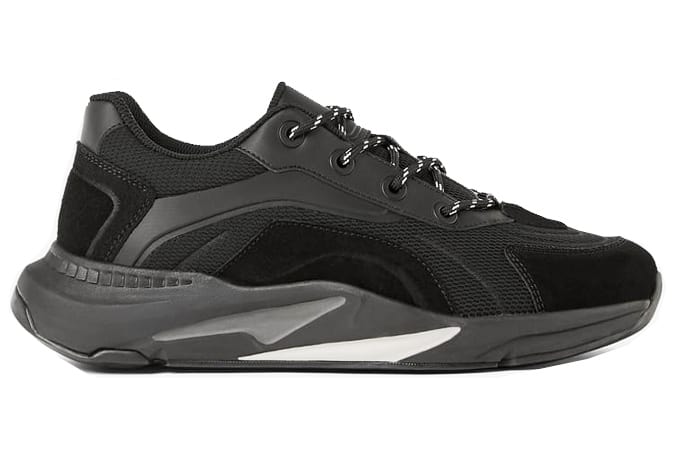 Parisian label A.P.C. is famous for its high-quality, no-fuss wardrobe essentials. If we had to sum its output up in a word, it would probably be ‘understated’ – something which you probably wouldn’t have thought would gel very well with the current preference for sneakers that look like they’re on steroids.

But despite this little discrepancy, A.P.C. has churned out some of the most inoffensive, versatile and ultimately wearable chunky shoes we’ve seen. Clock the signature, subtle branding and a look that manages somehow to be both showy and restrained simultaneously. 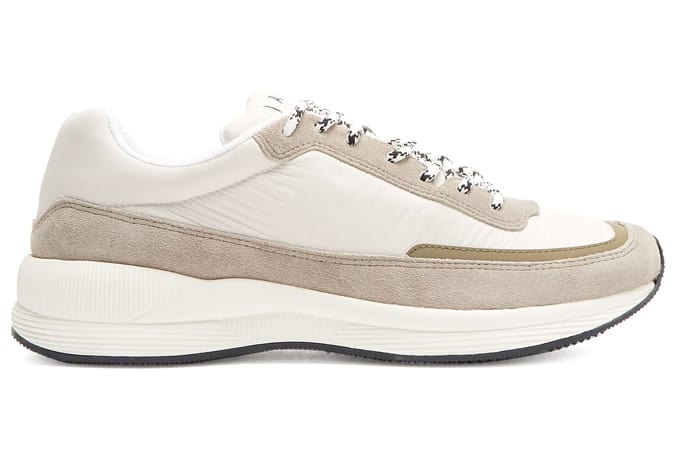 If you’re keen to give a new look a go but aren’t so hot on the idea of signing up for any medical trials to finance it then ASOS should be your first port of call. The online fashion mecca is full of the latest styles, with bargain options from its in-house line sitting alongside designer pieces from your favorite names.

A base of chunky white sneakers with vibrant hits of green and blue, these retro, eye-catching stompers from ASOS offer the perfect opportunity to get some heads turning for all the right reasons. 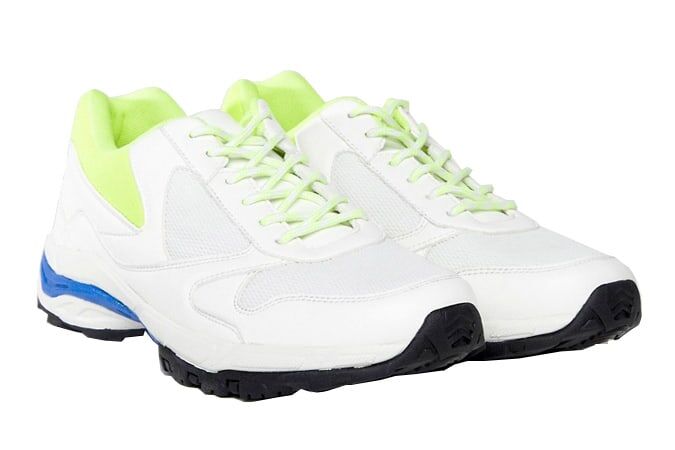 Do chunky shoes mark the end of minimalist sneakers?

So does the chunky trainer movement spell disaster for minimalist footwear? MatchesFashion’s Ben Carr doesn’t think so, but he’s not surprised that there has been a shift.

“While I don’t think the clean sneaker is going anywhere, there is certainly a ubiquity to their presence in modern menswear. Think about it, if you are a teenager and your dad is wearing a minimal sneaker then you’re not going to want to adopt this style are you?

“I think fashion in its purest form is always, and always has to be, a reaction to what has gone before.”

How to style chunky sneakers?

Chunky trainers are currently shattering paving slabs at fashion weeks across the globe, but incorporating them into a workable, everyday wardrobe can understandably present a little bit of a challenge.

“My first tip is not to wear them with a minimal look,” says Carr. “They become the sole focus [no pun intended] of the outfit and that’s never good.” He also suggests wearing several layers on top to help balance out the look and to experiment with bright colors and pieces that will distort your silhouette. He adds: “cropped trousers, track pants and oversized sportswear work well… and the chunky sneaker can anchor this.”

Oki-Ni’s Brines believes that going sockless with chunky trainers is never a good idea and stresses the importance of wearing the look with confidence. “Wear the shoes, don’t let the shoes wear you,” he explains. “If you’re just wearing them because they’re on trend, and you’re not that into them, the fashion cognoscenti will smell you out a mile away.”

So, blame Raf Simons, blame Balenciaga, blame your dad – whoever is truly responsible for the rise of the beetle crushers is irrelevant. The fact of the matter is that sneakers are titanic now and you should probably join the party before it’s too late.

Is Bitcoin Market Sentiment Shifting from Fear to Capitulation?

The Trick Sabrina Carpenter’s Makeup Artist Used for the AMAs

Shopping for wide feet is about as shitty as forgetting bug spray on a camping trip. It can quickly ruin a whole weekend...