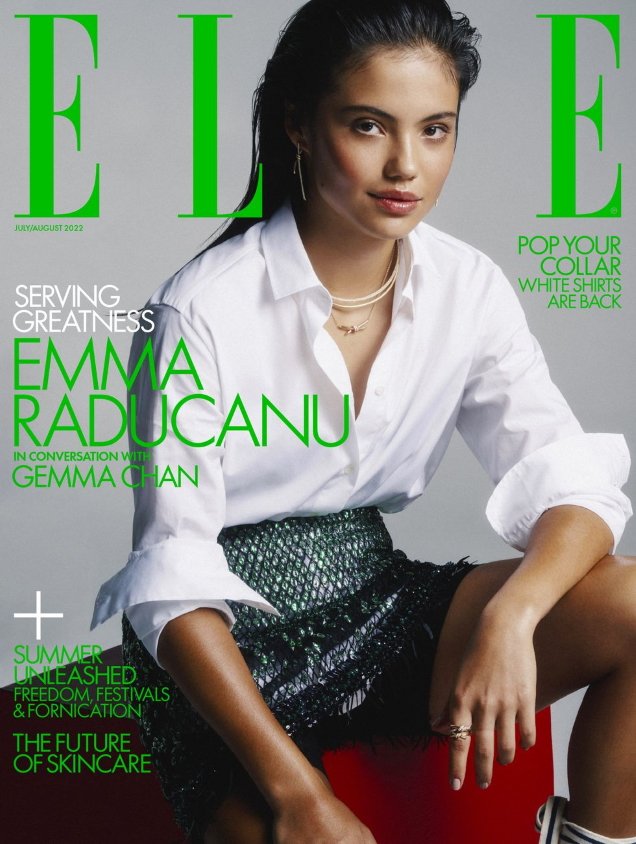 But British ELLE‘s latest divided our forums. “One to please the sponsors and as a July/August issue timed to coincide with summer tennis,” noted tigerrouge.

“This should have been shot on a tennis court,” voiced caioherrero.

“She’s a beautiful and talented young lady, but I feel this is not great. Is this her first cover?” asked carbon-made. “I feel the studio setting intimidated her a little bit, I agree this should have been shot outdoors where she could have perhaps been more carefree.”

“Emma Raducanu reminds me of a young Angelina Jolie. The cover seems rather dark…” Urban Stylin chimed in.

Although not everyone was so quick to disapprove of the outcome. “WOW, don’t know who she is but she is GORGEOUS! And I live for the styling… I would have loved to have seen this shot on location on a tennis court though, too,” commented Bertrando3.

“Very much a fan of this! There’s a simplicity and sense of sophistication with the styling that I like, feels very elegant and mature. Also not even mad at the fact this is a summer issue and it was shot in the studio because it’s just so…chic,” raved vogue28.

See more from the pages of the July/August 2022 issue and have your say here.

Bitcoin’s consolidation in the lower $20K level continues as the leading cryptocurrency has lacked significant momentum to breach this zone. Rekt Capital believes the...

Thor: Love And Thunder Early Reviews Are In And Things Are Looking Up

The next installment in Marvel 's Thor storyline is just 3 days away...

In the most recent episode of Keeping Up with the Kardashians, Kim revealed to...