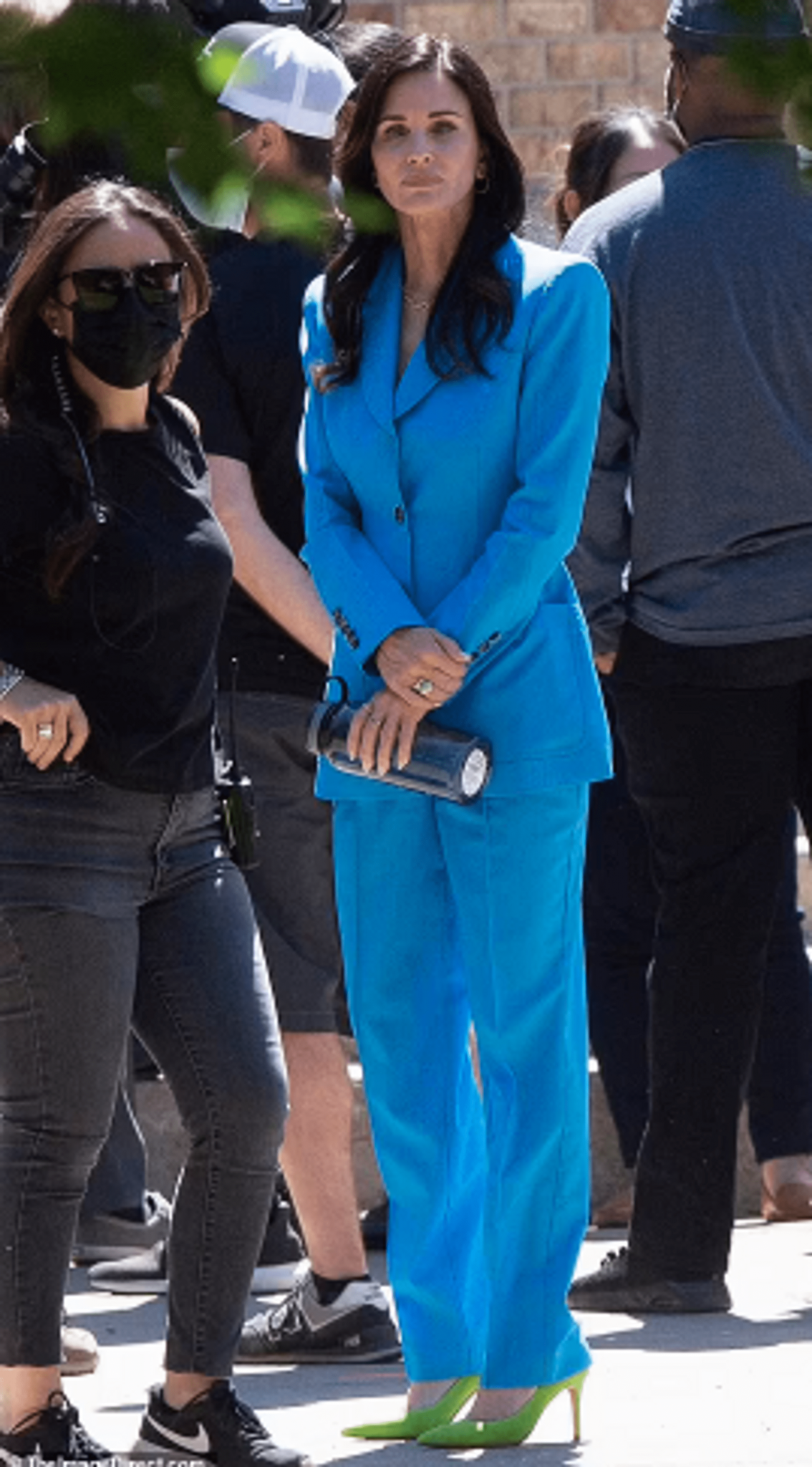 Courteney Cox was spotted for the first time in new footage from the filming of ‘Scream 6.’ Gail Weathers has arrived at yet another crime scene.

New footage from the filming of the upcoming film Scream 6 has surfaced online. On the site of the slasher, Courteney Cox first appeared, who returned to the role of TV presenter Gail Weathers.

In fact, Courteney Cox was the first Scream 6 star to be spotted on the set of the film. Before, we only saw ambulances, policemen, and the press.

In the pictures, Gail appeared in a stylish blue suit. You can see that the heroine is speaking in front of the camera.

In the previous parts of the Scream series, Gail often came to crime scenes to tell the TV viewers about what happened.

Looks like Gale won’t be holed up in the TV studio in the new movie either. In the pictures, the heroine clearly tells the audience about a new murder committed by another maniac in the Ghostface mask.

Courteney Cox, after the release of the sixth “Scream,” will be the only star of the cult franchise Wes Craven, who starred in all parts.

Neve Campbell refused to take part in the project, so Sidney Prescott will not return in Scream 6. And Dewey Riley, played by David Arquette, died in the fifth film. True, Dewey may well appear in flashbacks.

Scream 6 will see the return of Scream 5 characters Sam and Tara Carpenter (Melissa Barrera and Jenna Ortega), as well as Mindy and Chad Mix-Martin (Jasmine Savoy Brown and Mason Gooding).

According to the plot, the characters will leave Woodsboro and leave for a new city to start life from scratch. They are expected to travel to New York. There they will be met by Ghostface. Matthew Bettinelli and Tyler Gillett’s Scream 6 is set to premiere on March 31, 2023.

This $44 Exfoliator Is Behind Whitney Port’s Glowing Skin

Take one look at Whitney Port’s glassy, next-level-glowing skin and you’ll want to know everything she’s applying to her complexion day and...

For renowned actress, Julianne Moore, nearly four decades in the spotlight has forced her to do a lot of thinking about what...

Epic Games is also involved in several demonstrations and presentations around the I/ITSEC conference with our partners.   The NBT TalX - The Consumer Metaverse...

Blake Lively, in a mini flying dress, inspires layered outfits for walks in the summer city

The actress shows how to combine a romantic silhouette and sports shoes. The...