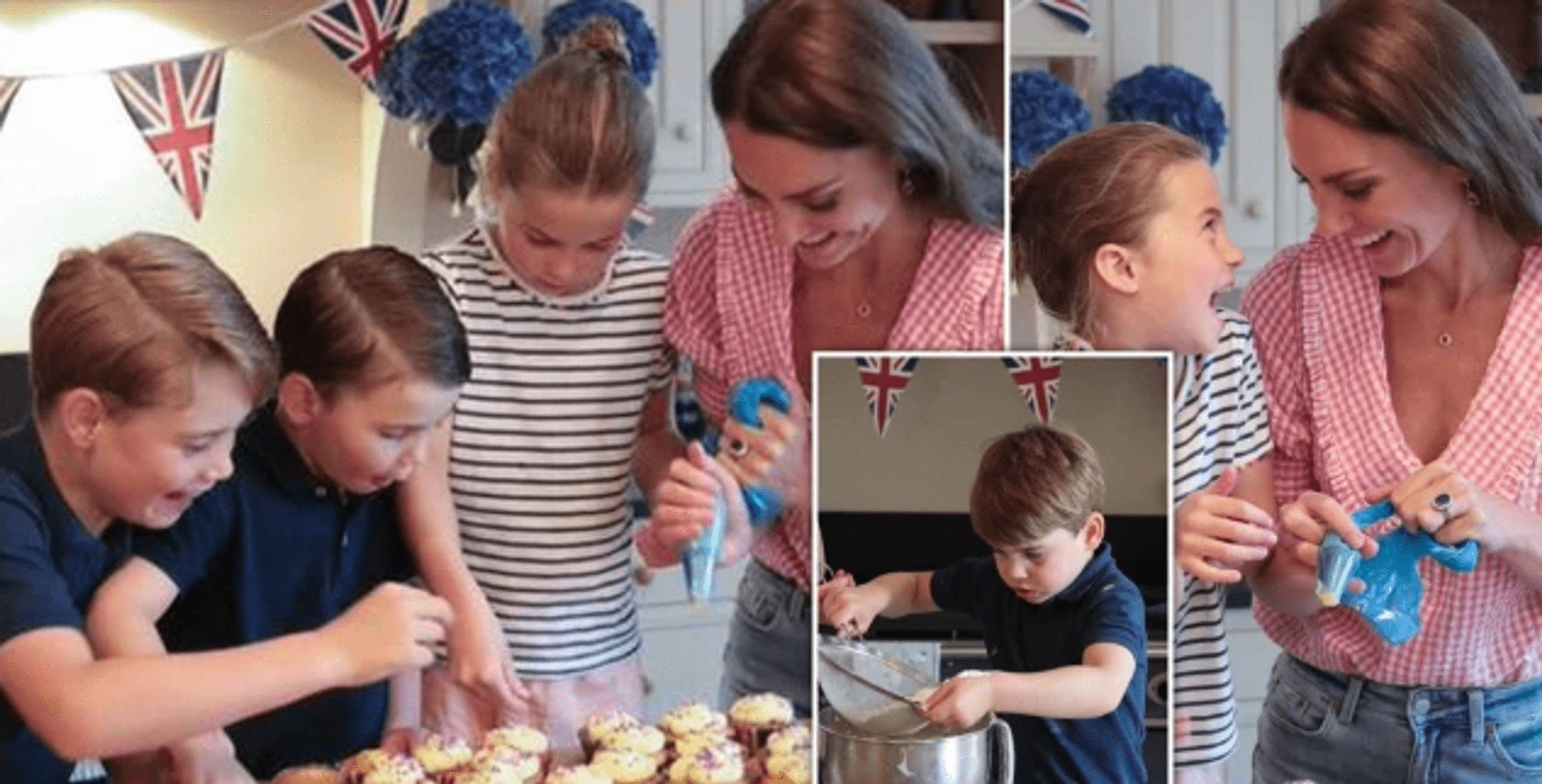 The arrival of the Dukes of Cambridge with their children in Wales. Kate and William visited Cardiff with George and Charlotte. Only the youngest, Prince Louis, was missing from the Cambridges.

Although the baby was not taken on the trip, he, along with everyone, helped his mother in preparing treats for today’s event.

On June 5, the capital of Wales will host regular festivities in honor of the Queen’s platinum jubilee. Especially for the street fair, Kate Middleton decided to bake cupcakes, and little princes and a princess volunteered to help her with this.
The Duchess shared cute snaps on social media of George, Charlotte, and Louis cooking in their kitchen ahead of their visit to the Welsh capital. “Baking cupcakes for the local community in Cardiff to enjoy at the Platinum Jubilee street party tonight! We hope you enjoy them!” Middleton signed the post.

The photographs show how the children make the dough: Charlotte broke the eggs, and Louis sifted the flour with a sieve. George, meanwhile, was helping his sister add the ingredients. Subscribers appreciated the efforts of the little princes and princesses! “Well done!”, “Mom’s helpers!”, “Thank you for sharing such priceless moments,” wrote admiring followers.

In a previous post, The third day of celebrations on the occasion of the platinum jubilee of Elizabeth II began with the arrival of the Dukes of Cambridge with their children in Wales.

Kate and William, along with George and Charlotte, attended a rehearsal for the concert in Cardiff. Only the youngest, Prince Louis, was missing from the Cambridges. The little one is only four years old and, apparently, he was considered too small for the trip.

For the past couple of years, Kate has been looking incredibly stylish and restrained, adhering to the classics. Calm colors, minimalism, elegant hats, sheath dresses – these are the things that helped the Duchess become a style icon. Middleton rarely wears bright colors, but today she decided to take a chance.

The Hottest Women Over 50 at the Golden Globes

After a year hiatus, the Golden Globes grey carpet is back and better than ever. As the best in entertainment gather to...

Kandi Burruss has a new Speak on It episode out. Check out her post...

With so many enticing fall-inspired fragrances on the market, it can be hard to choose which you want to take home with...

Zendaya’s Favorite Curl Products Are Up To 60-Percent Off

Whether it’s their red carpet looks or stunning on-screen features, we’re always looking out for the products behind our favorite celebrities’ most...