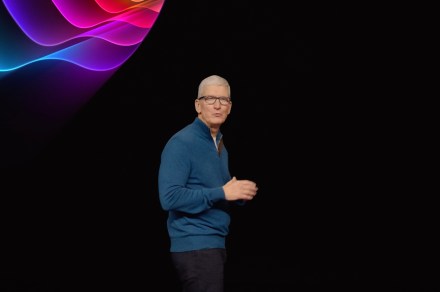 Apple is famous for keeping its cards close to its chest when it comes to upcoming products, so comments made by CEO Tim Cook this week have surprised many observers.

Speaking in an interview with China Daily USA, Cook gave the clearest hint yet that Apple is working on a high-tech headset.

Discussing AR technology, Cook said, “Stay tuned and you’ll see what we have to offer.”

Yes, that was pretty much it, but for Cook, that’s saying a lot. It’s funny that he actually said, “sort of stay tuned …,” as if he couldn’t quite bring himself to be emphatic about it, because that’s not the Apple way.

Rumors about Apple’s interest in a headset have been swirling for a long time, but Cook, despite often expressing an interest in AR technology, has until now been careful not to give anything away.

Sure, we still have no concrete details on the product, but the person at the top has all but confirmed that a head-based device is on the way.

Speculation over the last few years has pointed toward Apple developing not one, but two products: A pair of AR (augmented reality) glasses and a mixed-reality headset that incorporates both AR and VR.

To put it simply, a VR (virtual reality) headset offers an immersive experience in a digital world, and is popular for gaming. AR glasses, on the other hand, place digital overlays of text or images over what you’re seeing in the real world. An AR/VR headset (mixed-reality) combines both technologies.

In this week’s interview, Cook only ever talked about AR, saying he was “incredibly excited” about the technology and adding that he believes “we’re still in the very early innings of how this technology will evolve.”

He continued: “I couldn’t be more excited about the opportunities we’ve seen in this space,” before finishing off with his line suggesting folks “sort of stay tuned.”

Many observers expected that Apple might unveil its first headset at its Worldwide Developers Conference earlier this month, but it wasn’t to be. Recent reports have suggested the tech giant could unveil an AR/VR headset toward the end of this year, while the AR glasses might not land until 2024. Perhaps that’s what Cook meant by “sort of stay tuned.” The expression usually suggests something will be along soon, but Cook’s unusual choice of words is perhaps his way of saying, “But don’t stay too tuned because it’s gonna be a while.”

To find out everything we think we know about Apple’s headset plans, Digital Trends has a carefully curated page featuring all of the incoming news.

BrandArmy is a revolutionary social media platform that allows users to monetize content and receive a boosted income. The platform hopes that its...

Italian fashion group Brunello Cucinelli on Tuesday raised its sales guidance for 2022 for the third time this year, saying that demand for...

Kevin Bacon is one of the most iconic actors of all time who has...