NFTs are all the rage, but why?


What’s that NFT everyone is talking about? In case the kerfuffle escaped you altogether, here’s a quick summary.

In 2021, people spent some $25 billion on NFT. Christie’s – the British auction house with 250-year-history – auctioned off its first NFT for a heart-wrenching $69.3 million. And it was a collage of 5000 digital images, for Christie’s sake. Do you feel intimidated yet?

Okay, apparently, NFTs are a big deal. What’s an NFT?

Fancy. Now we know what it stands for, care to elaborate on what it is?

Of course. Basically, any digital file can be converted to an NFT, which is just a piece of code that exists on a blockchain.

This code consists of such information as token ID, which is generated upon the creation of the token and unique to each NFT, and contract address. The latter is where the contract is deployed since NFTs are minted/created through smart contracts. And these two elements make the NFT.

Excuse me, so what exactly do you buy when you buy an NFT?

‘Ownership’. It’s difficult, we understand. Suppose it was you who bought Everydays: the First 5000 Days for $70 million. Have we already established that it’s a digital file? So, hanging it above your fireplace is off the table. At least you can still admire it on the internet if you follow the link, right? Oh wait, so can I! And if I’m feeling greedy, I can also download it on my computer by right-clicking the image and pressing ‘Save’. 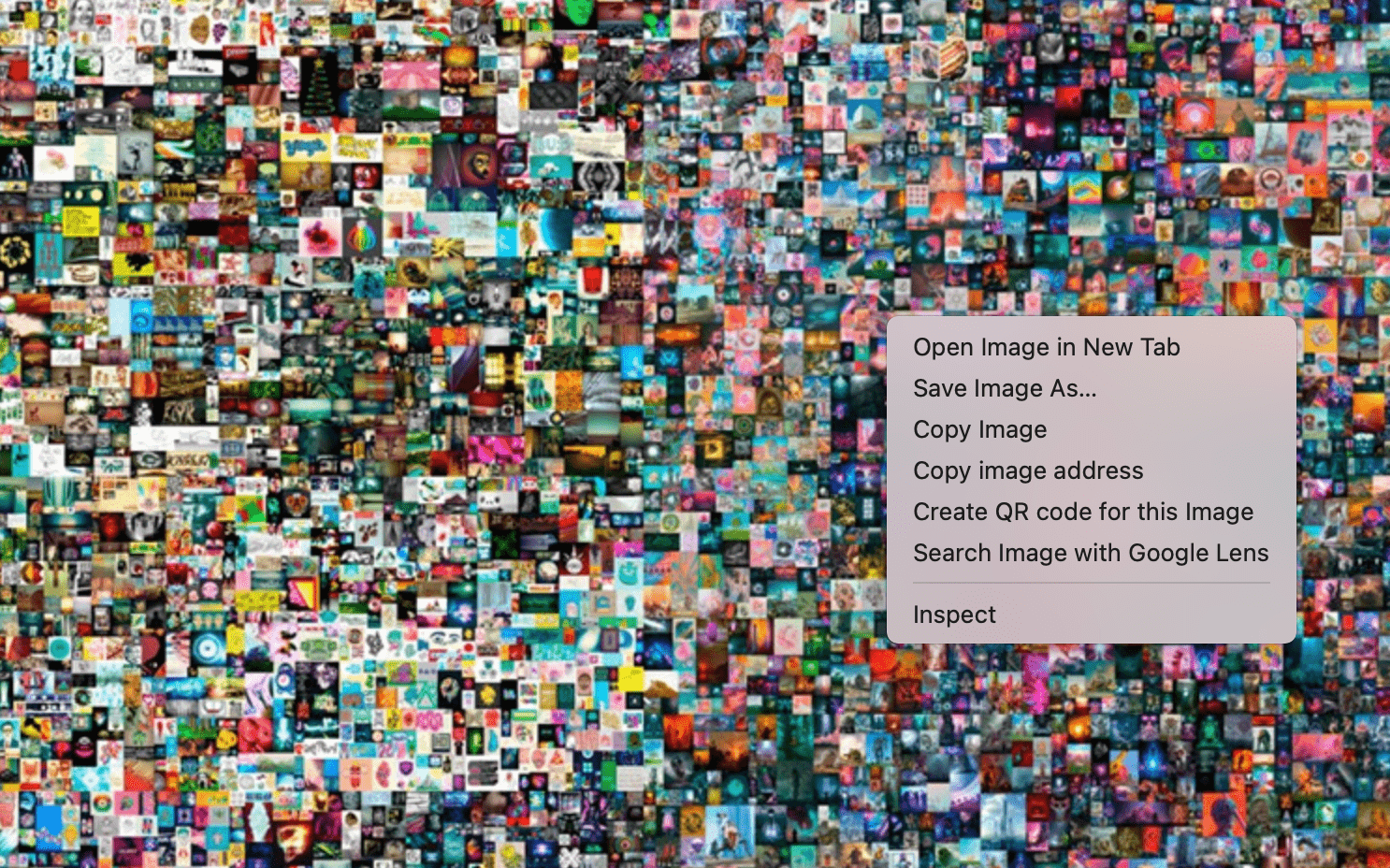 ‘Right-clicker mentality’, some would scoff. Well, okay. What we’re getting at is that buying an NFT doesn’t mean you’re now any closer to the actual work of art than the next person. To be crystal clear, you’re purchasing the metadata associated with the 5000 Days, not the picture itself. Which, essentially, equals to a piece of code, and the fact that you purchasing the said NFT is now forever ingrained into some blockchain.

Do I at least own the copyright?

Funny you should ask that because we should definitely say a few words about copyright. But okay, first the answer to your question. No. You don’t own the copyright, that would be the creator. You do not acquire any rights to the original thing unless agreed otherwise and set out in the smart contract. However, you acquire the rights to store and resell your NFT.

Here’s a funny thing – the creator of the original work can reproduce it as many times as they like creating an endless number of NFTs of the same thing. So, you wouldn’t even be the only person to have the ‘ownership’ of the work’s metadata – as if it were enough, to begin with. But before you unleash the wrath of hell, here’s another issue.

It might not very well be the actual copyright owner who floods the market with dozens of NFTs of the same piece. It might be any tech-savvy person who knows how to save files on their computer and create non-fungible tokens.

Did somebody say ‘copyright infringement’?

Make no mistake, there’s no legislation tackling such matters. But yes, in theory, if the NFT in question gives a link to the work it references, then the artist can at least approach the server and ask them to remove the piece. If they do, the only injured party will be the person who bought the NFT of the said work, as the token won’t even reference anything anymore. But it also might be the case that the work is stored on a decentralised server – meaning not in a single place but on multiple unidentified devices across the world. Removing the work from them all is near-impossible.

But then again, if NFT is not the work but merely a string of numbers, can it really be considered a reproduction? The jury is still out on this one.

So NFTs were created to make artists suffer?

Quite the opposite, actually. The original idea was to help artists across the globe have more control over their works. Here’s the concept described by its co-creator, Anil Dash:

‘The idea behind NFTs was, and is, profound. Technology should be enabling artists to exercise control over their work, to more easily sell it, to more strongly protect against others appropriating it without permission. By devising the technology specifically for artistic use, McCoy and I hoped we might prevent it from becoming yet another method of exploiting creative professionals. Our dream of empowering artists hasn’t yet come true, but it has yielded a lot of commercially exploitable hype.’

Well, at least royalties are a thing. NFTs can be resold. If the creator ticks the royalties option prior to minting a new NFT, they will receive a royalty fee every time the NFT changes hands (hilarious).

How did NFTs become so popular then?

How indeed. Back in 2017, there was this game called CryptoKitties, which ran on the Ethereum network and at some point was responsible for over 10% of Ethereum’s traffic. In terms of gameplay, not a great deal – you bought and bred NFT cats. Before you say it sounds very much like a footnote in history – someone has purchased an NFT kitty for $117k (!). And as everyone knows, there’s nothing like paying $117k for a virtual cat to arouse the general public’s interest. 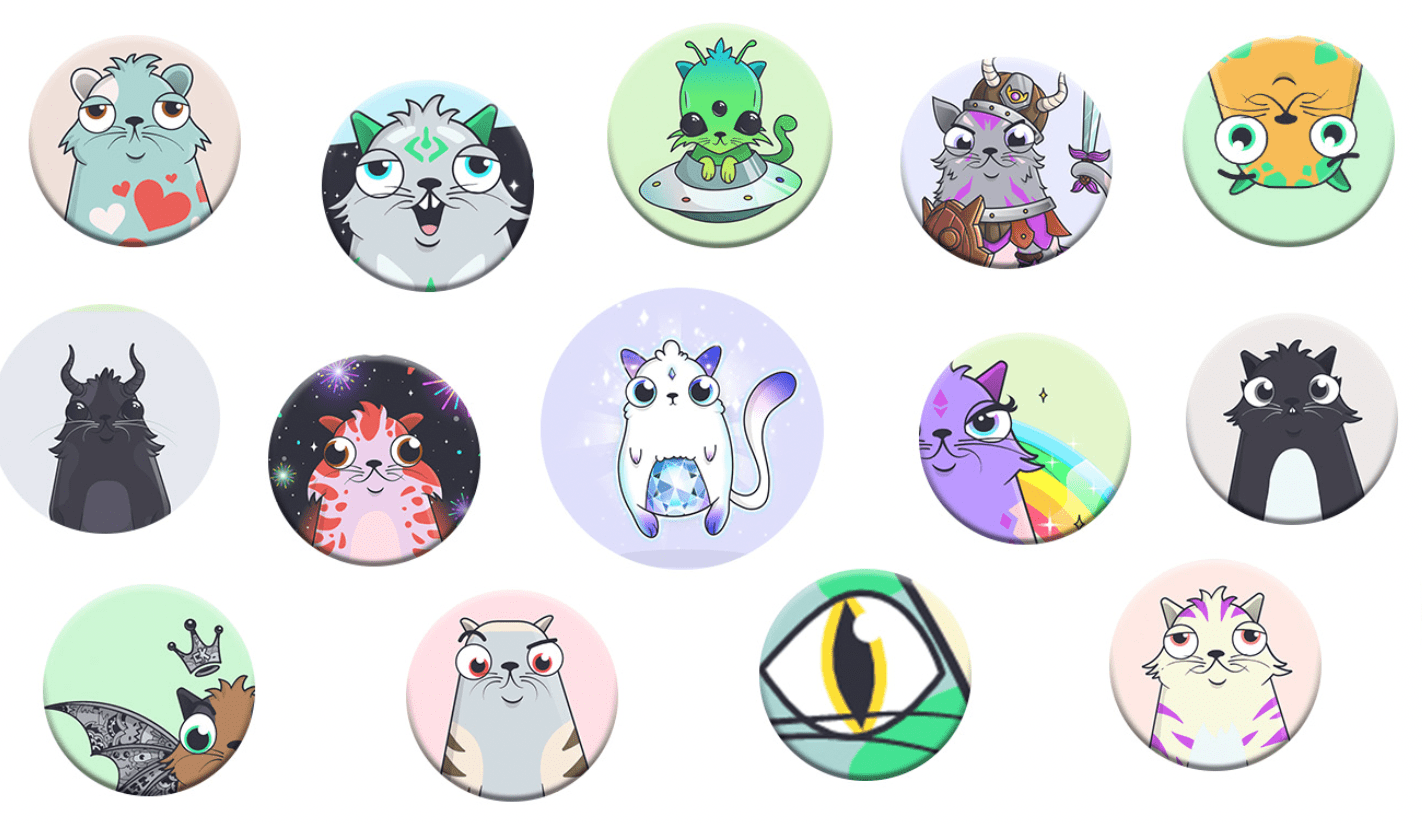 Of course they’re adorable! Would you pay $117,000 for one? Source: CryptoKitties

By the way, this only became possible thanks to Ethereum rolling out this new ERC-721 standard that allowed the support of NFTs.

So, how does one create an NFT? Asking for a friend.

Mm-hmm. There are many available marketplaces to buy, create and sell NFTs, with OpenSea, Rarible, Nifty Gateway and Foundation being among the most popular choices of CryptoPay users.

The process is actually quite simple. You link your crypto wallet (put a pin in it), upload the work, set an auction and let the platform generate your NFT. It’s only a question of time before it finds its buyer.

Now pull out the pin. You actually linked your wallet for a reason. Before you can reap the rewards, you will have to endure some fees. Namely, a listing fee, a fee to generate your token, a fee on sale (if it’s happening) and a transaction fee to boot. And thanks to the occasional lack of transparency of such marketplaces and the general volatility of the cryptocurrency market, you will have to wait and see how hard all those fees will hit you.

Meanwhile, here’s an interesting piece of stats for you. This research into NFT sales used the public API of OpenSea to find out just how much an average person earns on selling their tokens. It turns out that one-third (33.6%) of all sales for that period were for $100 or less. One-fifth – for $100-$200.

But wait, what about fees? The same research states that the average fee on a $100 sale was 100.5%, leaving creators with a $0.50 debt. One-third of all creators were operating at a loss. Please give your friend a piece of advice. NFT business might not be just as lucrative as they expect.

I’ve heard that NFTs are controversial… Why?

Do you mean apart from the things already mentioned? Oh, okay. Well, NFTs exist on blockchains, primarily on proof-of-work Ethereum, and you know what that entails. PoW transactions require an inordinate amount of computational power to be processed, and NFTs include many transactions. There’s minting, bidding, sales, transfer of ownership, cancelling… In fact, a recent study into the electric energy consumption of NFTs showed that the footprint of a single NFT is equivalent to an EU resident’s total electric power consumption for more than a month. The emission – to driving for 1,000km or flying for 2 hours. Let that sink in.

The even sadder truth is that the carbon footprint doesn’t depend on the price for which a token sells. And since you probably have better chances of selling many NFTs cheaply than just one but for a few million dollars… Yeah.

Why not? 🤷‍♀️ Artists (but not exclusively) can still make money, and people who buy metadata of collages for $70 million get free publicity. For the rest of us, investing in NFTs amounts to buying autographs or trading cards. You still ‘own’ something, right? At least until the server goes down or the link to your NFT rots. Is the king naked? Oh, come off it. What does it matter if everyone is having fun?

If you’ve always been curious about crypto, but don’t know how to approach it, try Cryptopay Learn. Even the most complicated topics are explained simply, so you don’t feel overwhelmed. Crypto is an exciting field, and Cryptopay Learn makes it accessible too. So, Register with Cryptopay to begin you crypto journey now!

And as for storing NFTs, NOW Wallet is always here for you.

NB! This article is co-authored with Alyona Shepilova and was originally published here.

American actor Bo Hopkins passed at the age of 81 at Valley Presbyterian Hospital in Van Nuys, Los Angeles. According to Deadline, the...

Victoria Beckham staged her first show in nearly three years on Friday at a church in Paris.The event was a milestone for the...

A friend and associate of West's corroborated the revelation to The Post that some professors at Kanye West's Donda Academy departed in protest...

Some of the fastest-growing technology companies of the last decade are now well-entrenched in retrenchment mode.A case in point is Meta which sees...

After A Significant Drop In His Net Worth, Kanye West’s Fans Created A GoFundMe To Turn Him Back Into A Billionaire